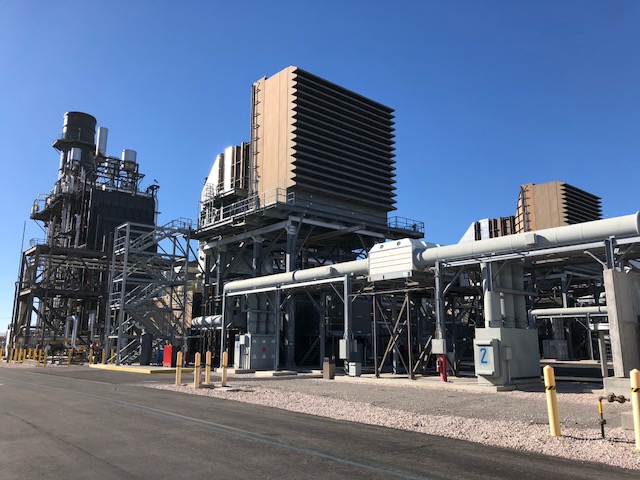 Buffalo Bill’s Casino near Primm, Nevada greets drivers with a chaotic mashup of western stereotypes and a roller coaster, but for power professionals, the nearby Walter M. Higgins Generating Station might be an even odder sight.

The station emerges from behind a hill as an almost perfect rectangle, with none of the peaks, valleys and cooling towers you’d usually expect from a gas-fired, combined-cycle plant.

“Every drop of water used on-site stays on-site,” he said.

As you’d expect, Higgins includes a treatment area to clean all water used. But the treatment doesn’t just benefit the station. As water in the desert can be hard to come by, Higgins draws in its supply from Primm. The pipeline purposely draws in untreated or “gray” water, reducing the amount of water Primm has to treat themselves.

For all the advantages of Higgins’ dry-cooling system, Anderson said there’s one drawback — the plant has to operate 40 fans in the system compared to eight that would be necessary for a typical cooling tower at a similar-sized plant.

However, Higgins personnel operate those 40 fans as efficiently as possible. Each fan cycles through different speeds depending on the temperature of any given area, typically starting at the center and eventually moving to the edges. That way, parts of the cooling system that aren’t as hot as other areas don’t power up local fans as much.

Higgins faces other operational challenges beyond the climate. As expected, the area’s power demand peaks during the day. But Kesha Carter, director of Higgins, said the plant encounters a second peak at night thanks to hundreds of thousands of tourists seeking riches and entertainment at Las Vegas casinos.

“As more and more renewables come online, mostly solar, we lose their generation at night,” she said. “Our peak generation time is from 7 p.m. to 1 a.m.”

“We only have two technicians available, so having one system instead of five is easier for us to handle,” he said.

The unified control system also handles operations at Goodsprings Energy Recovery Station six miles to the north. This 5-MW facility arguably takes even greater advantage of its surroundings than Higgins.

Hot exhaust heats up a thermal oil transfer fluid which is pumped to Goodsprings and used to vaporize pentane, an organic working fluid, into gas and run a turbine.

Like Higgins, Goodsprings features a dry-cooling system. But this system uses fans to cool pentane for re-use, rather than water.