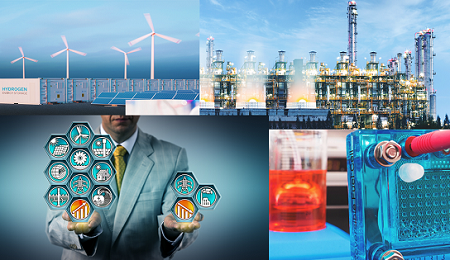 The starting gun on the race to decarbonize fired a long time ago.

Ditto that for the power sector already on board and moving forward.

Destination 2050 is the theme of POWERGEN International, a nod to all the utilities and industries aiming for net-zero carbon emissions by that (not so) faraway year. The Future of Electricity is guaranteed, but what it will look like is molded by what’s happening now.

This month’s POWERGEN+ online series is focused around that future now. Another wise man once said that “decarbonization doesn’t just mean renewables,” and he clearly was on to something.

The power sector in 2050 almost certainty will still include gas-fired generation and maybe even some coal. What power plants might also offer is green hydrogen in the mix—and that potential anchors the POWERGEN+ offerings for June 23-24.

Brian Anderson, director of the U.S. Department of Energy’s National Energy Technology Laboratory, will deliver the June Plus keynote beginning 10 a.m. ET Wednesday, June 23. The NETL is engaged with all kinds of work around low-carbon alternatives for baseload power, including H2, small modular reactor nuclear, carbon capture and much more.

Plug Power’s team of executives Darin Painter and David Bow will present a session on “Hydrogen in Action: Latest advancements on H2 Infrastructure and Integration.” This session will discuss challenges, capabilities and opportunities in building a potential $10 trillion hydrogen economy of the future, and it begins at 12:30 p.m. Wednesday, June 23.

Michael Rutkowski, senior vice president with the GTI’s Research and Technology Development wing, will partner with Neva Espinoza, vice president of Energy Supply and Low Carbon Resources at EPRI, to highlight the potential of deployment promising options for reliable and low-carbon power generation.

The GTI and EPRI experts also will talk about their group’s joint effort on the Low Carbon Resources Initiative, a long-term project which already has about $110 million in funding from more than 35 industry partners including major utilities, OEMs and more.

The panel was put together by POWERGEN+ contributor Jay Dauenhauer, who is host of the Energy Cast podcast and formerly director of a Texas-based carbon capture association. This session begins at 12:30 p.m. Thursday, June 24.

The June finale for POWERGEN+ should be a gem, focused around a real-world case study of transition to hydrogen via the Intermountain Power Project in Utah. Lincoln Bleveans, executive director of Sustainability and Energy Management at Stanford University, will join with longtime industry consultant Bob Schulte, principal at Schulte Associations LLC, to discuss the Intermountain project and the concept of hydrogen as not only a production resource, but a storage resource. “ The session on “Black, White or Surprisingly Green? Transforming Old Coal to New Green Hydrogen at the Intermountain Power Project,” will begin at 2:30 p.m. ET.

All sessions are 45 minutes long except for the shorter keynote address. All of the POWERGEN+ content is free and available on demand after the live event.