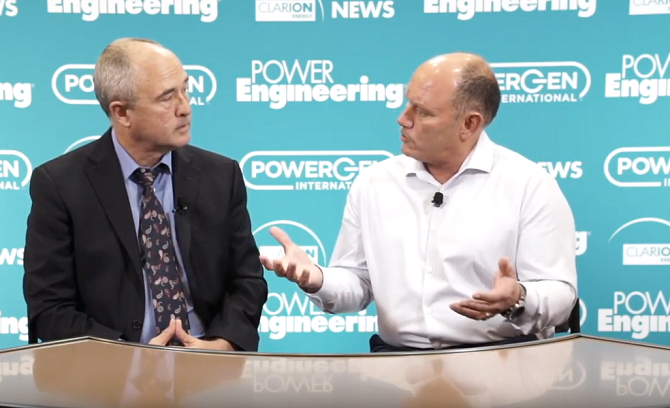 The pace of change reached a fevered pitch at POWERGEN International in New Orleans last month, but the conversations were thoughtful, measured and full of expertise.

I was fortunate enough to meet with scores of industry insiders at POWERGEN 2019, talking everything from digital transformation to relocatable, on-site power to repowering projects to the prospects of using U.S. shale gas to fuel global generation stations. The speakers ranged from east coast to gulf coast to west coast and beyond.

Some of those were captured in video Q&As at the Clarion Energy studio inside the Morial Convention Center exhibit hall. I chatted with representatives from AES, Energy Capital Vietnam, Eagle LNG, Public Service Co. of Oklahoma, Rockwell Automation and Doosan Portable Power. It was a hectic shooting schedule, but well worth it.

Rodrique also participated in a Digital Transformation panel focused on how to train future power plant employees on the newest phases of technology adoption. AES has offered new training to help legacy operators get up to speed.

“Knowledge is power,” he said. “There’s a lot of industry tools, a lot of 3D animation and simulators and learning management platforms…It’s something that’s continuous.”

Mark Barton is a veteran plant manager himself, having overseen PSO’s Northeastern Station in the past 12 years. Northeastern Station, which is north of Tulsa, Oklahoma, began as a coal-fired plant, although gas-fired units have been added to reduce air pollution and add capacity.

At one point, PSO parent American Electric Power and Barton’s team planned to add carbon capture technologies to Northeastern’s two coal-fired units. Eventually, however, AEP opted to close one unit three years ago and will retire the second by 2026, despite adding some control equipment as part of an agreement with federal regulators.

Making carbon reduction moves is one thing, but shutting down facilities that affect longtime employees is another. Barton admitted that it hasn’t been an easy path.

“It’s difficult from a professional and personal level,” Barton said at POWERGEN. “There’s a lot of people who shut it down who also had started it up. . . It’s a machine, but it’s a machine that you’ve grown accustomed to, and it was a way of life.”

Barton chaired a panel session in the Future of Coal-fired Generation track which drew a packed crowd. Speakers included experts from Black & Veatch, SEFA and Babcock Power International talking about challenges and the sustainability of coal-fired power.

Tom McDonnell, of Rockwell Automation, related his POWERGEN experience moderating a panel on cybersecurity in the modern power plant. The consensus is that the utility industry has evolved in the past 10-15 years in understanding the threats from hackers.

“Everyone recognizes it’s a journey,” said McDonnell, who is also a member of the advisory committee. “I cannot think of a utility that doesn’t take it seriously.”

Craig Wilkins, a lead of sales for Doosan Portable Power in North American, stopped by the Clarion video booth to talk about the emissions regulations for on-site power and unique market opportunities. Doosan Portable Power has provided gen-sets (500 kW and smaller) for everything from professional golf tournaments to movie shoots, oil and gas drilling and emergency sites during disasters. Click here to see the interview with Wilkins.

“The Tier 4 final (rules on emissions) were out several years ago, so everybody is providing Tier 4, which added some significant costs and technical training,” Wilkins pointed out. “But everybody is on board and we’ve got a lot of bugs worked out.”

Finally, Frank Moreno and David Lewis were interviewed about the current and future prospects for LNG export. Moreno is with Eagle LNG and Lewis is CEO of Energy Capital Vietnam.

“There are very exciting times in the LNG business,” Lewis said. “What’s happening in LNG is a reflection of what’s happened in the upstream (natural gas) industry over the last decade.” See the interview with Lewis here.

The shale gas revolution, driving U.S. production to nearly 100 billion cubic feet per day, has turned the nation into a net energy exporter, able to pipeline natural gas to the coasts, freeze to liquify and then ship around the world.

Eagle LNG is building infrastructure near Jacksonville, Fla., for liquefied delivery to the Caribbean, while Energy Capital Vietnam is working on a market connection to that nation. Click here to see the video interview with Eagle LNG’s Moreno.

(Rod Walton is content director for Power Engineering and POWERGEN International. Credit to Charles Eubanks for shooting and editing the interviews under tight timelines.)