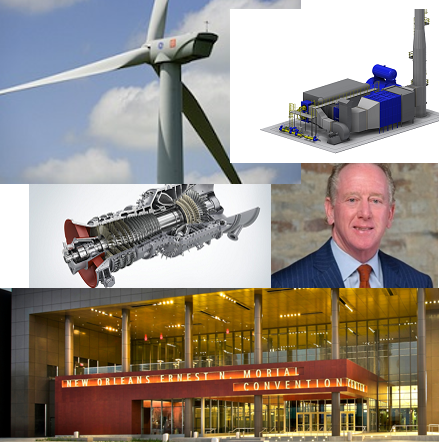 If variety is the spice of life, there’s no better place than New Orleans to showcase that idiom in action.

We hear that. POWERGEN International is happening November 19-21 in the Crescent City, which is the perfect shape for a big circle of friends (15,000 of them) to gather and discuss every important detail of the power generation industry.

Yes, there’s the food and music clubs extraordinaire, but there’s also a tremendous array of speakers and topics available at the Ernest N. Morial Convention Center a short stroll from Canal Street and the Mississippi Riverwalk.

Some would say that a conference like POWERGEN is a massive insider party, limited to a large but select, narrowly defined group of professionals. And they would be partially right, not accounting for the diverse, interconnected group which will hit New Orleans in less than four weeks.

Utilities? POWERGEN is pleased nearly 30 different power providers are sending speakers to talk on everything from digital transformation and cybersecurity to gas-fired turbines, energy storage, microgrids, coal-fired and large-scale wind power, among other things.

Overall, more than 70 power generators worldwide are sending their employees to POWERGEN as attendees.

That shows international diversity, of course, but the event is not just about the customer-facing entities on the grid. POWERGEN will also play host to large-scale customers detailing various power challenges they are working to meet both on the research and end-use sides.

From the university customer spectrum, speakers will come from the University of New Orleans, Tulane University and Texas Tech University. The Port of Long Beach will be represented by Christine Houston, the port’s manager of Sustainable Practices, to talk about a microgrid system facilitating clean energy practices in the extremely industrial area.

POWERGEN is an “all of the above” power generation conference, which includes solar energy and the utility-scale wind content being offered. The National Ocean Industries Association, New York State Energy Research and Development Authority, Southwestern Electric Power, Enel Green Power, National Offshore Wind Research and Development Consortium and Wood will send its people to talk on the growing major wind projects being developed both in the U.S. onshore and offshore regions.

And, of course, professionals from some of the world’s biggest power plant firms will travel to New Orleans to speak on everything from gas-fired turbines, coal-fired plants, nuclear and diesel backup generation, as well as plant performance.

All of the world’s major turbine manufacturers–Mitsubishi Hitachi Power Systems, GE, Siemens and Ansaldo Energia–will be there to talk about their projects and best practices inside power plants. Doosan Heavy Industries, a major contract working on jumping into the large gas turbine space, also will send experts and exhibit at POWERGEN.

Engineering, procurement and construction contractors coming to POWERGEN number among the biggest the industry has, from Black & Veatch to Burns & McDonnell, Kiewit, McDermott and Day & Zimmermann.

On-site power giants such as Wartsila will be there, as well as Capstone Turbine to discuss combined heat and power opportunities. Many suppliers will be exhibiting within the On-Site Power Pavilion presented by the Electrical Generating Systems Association.

All in all, POWERGEN will offer 80-plus sessions covering more than 100 hours of expert commentary, lessons learned, best practices and futures forward. So there’s all forms of generation resources, as well as turbine, boiler, solar PV, generator and digital technologies involved in producing power.

After hours, networking parties are being held on-site and at various Big Easy venues, including Mardi Gras World where many of the floats are designed.

Business, networking, music. So what else is there left at New Orleans, other than football?

POWERGEN Internationall will welcome keynote speaker and New Orleans Saints legend Archie Manning, a College Football Hall of Fame and NFL Pro Bowl quarterback who also has two signal-calling sons you have have heard of–Super Bowl winners Peyton and Eli, if you haven’t. Manning will kick off the first day on Tuesday, November 19, talking about resiliency and leadership, two key things felt strongly by most attendees at POWERGEN.

The sheer variety of speakers certainly will give POWERGEN a slightly different look this year, but rest assured that the event’s foundational focus will be on four days of cutting-edge content surrounding power generation in all its form. POWERGEN University also will offer numerous classes on deeper educational aspects of the sector on Monday, November 18.

Who dat gonna be more varied than POWERGEN? Not many, dat’s who.