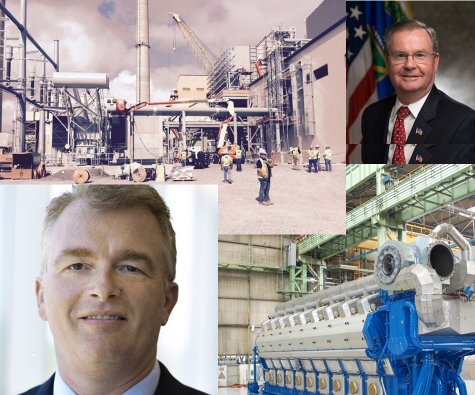 POWERGEN+ is coming to a laptop or workstation near you next week.

Just as films have moved directly onto streaming services in the wake of COVID-19, so has the coronavirus impacted the largest annual power generation event.

POWERGEN International is now planned for March 30-April 1 in Orlando. In the meantime, POWERGEN’s organizer, Clarion Events, and its partners want to stay connected with customers and partners in the electricity sector.

We need each other. In lieu of face-to-face encounters and conversations, the exchange of ideas and case studies happens on the virtual level.

Thus, the virtual POWERGEN+ series begins Tuesday, Sept. 29 and Wednesday, Sept. 30. The event’s first two days will offer an array of content, both editorial and sponsored, focused around Pushing the Power Generation Envelope. Registration and attendance is free and can include all sessions or just the ones the attendee wants.

Browning, who has held the company’s North American role for several years, recently had his role expanded to include oversight of the global turbine and power plant equipment and services company’s operations in Europe, Middle East and Africa (EMEA) operations.

About 15 minutes after Browning kicks off the event, U.S. Assistant Secretary for Fossil Energy Stephen Winberg will offer his welcoming keynote on “Strengthening Fossil Energy Power Generation for the 21st Century.” Prior to being appointed to the Department of Energy by President Trump in 2017, Winberg served as a Senior Program Manager at Battelle Memorial Institute and also worked in the industry for Foster Wheeler and CONSOL Energy Research.

The Mitsubishi Power session at 1:30 p.m. Tuesday will offer a deep look at “Creating the Hydrogen Future Today.” Power producers today are looking at carbon reduction edicts and coal-fired plant retirements and asking, “What’s next?”

The Mitsubishi panel offering insights to answer that question will include Michael Ducker, vice p­­­­resident, Renewable Fuels & Western Region, for Mitsubishi Power, and Janice Lin, CEO of the Green Green Hydrogen Coalition. All of the content sessions are 45 minutes long.

Other sessions will include longtime Siemens engineer and business development expert Galen George detailing the need for generators to adapt to the “new normal” via digital applications.

Click here to see the POWERGEN+ details and schedule.

“We want to build on the same content interaction and sharing of ideas that we do at the physical POWERGEN International, but at the virtual level,” Rod Walton, content director for Power Engineering, POWERGEN+ and the live event, said. “We certainly understand that the online event world is crammed with options now, but we believe POWERGEN+ will offer a diversity of relevant insights across all generation sectors. It will touch on everything from O&M, plant operations, to on-site power, energy storage and renewables.”

Day one also features an editorial session on reaching power plant compliance for both EPA and the Affordable Clean Energy rules and regulations. Una Nowling, fuels technology leader for Black & Veatch, will moderate a discussion including experts from Cooperative Energy and Vistra Energy.

Day two of POWERGEN+ is focused on the hugely important attributes of On-Site Power. Call it backup, emergency or standby, gen-sets provide grid resiliency and protection for mission-critical services and keep the power humming even in the face of hurricanes and other storms.

Kurt Summers, president of the Electrical Systems Generating Association, will offer the Wednesday, Sept. 30, keynote for “On-site Standby Power: Out of Sight, Out of Mind, but always Ready.”

Later in the day, Dan Shelledy of Wartsila will host key leaders from the City of Tallahassee, Florida Electric and Gas Utilities and Cooperative Energy to talk about resiliency, backup and balancing, and  surviving the impact of storms.

Another on-site power manufacturing leader, Caterpillar, will offer its expertise in a session on “Cogeneration Benefits and Critical Design,” centered around the positives of combined heat & power, often called CHP, for increasing fuel efficiency and lowering both emissions and costs for industrial customers.

The second day peaks with Mongoose Power Solutions’ Michelle Hilger, the company’s chief connector and on-site power advocate, speaking about protecting your power source and ensuring reliability with your diesel gen-set through proper care and maintenance.

POWERGEN+ will continue in October, November and December with sessions on renewables, energy storage, cybersecurity and more. Go to powergenplus.com for more info.