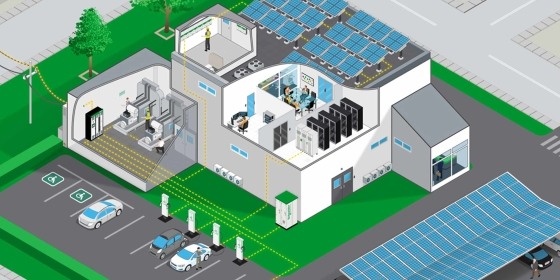 The COVID-19 headwinds of 2020 notwithstanding, the market for microgrids has maintained momentum, if not mania in the head-spinning year just past.

The desire for backup or even islanded power generation resources has appeal mainly to both mission-critical or marquee customers. It’s complicated—inverter-based generation, hello! —costly and typically customized to make an exact fit for that particular site.

Many in the industry, however, believe a time is coming, sooner than later, when more modular, repeatable and standardized versions of the microgrid will gather force in installation and adoption.

They will be smaller, smarter and pretty much the same from microgrid to microgrid.

“My favorite analogy, once upon a history, is if you wanted a new suit you went to a tailor,” said Lance Haines, who is chief technology officer for microgrids at Schneider Electric. “The tailor would measure you, and weeks later you’d get a suit that fit exactly to the measurements.

“Somewhere in the span of history they invented the off-the-rack suit,” he added. “You go to Macy’s, try them out and get one that almost fits.”

No doubt that historically harsh weather and grid resiliency fears are driving mission-critical entities to favor the “traditional” microgrids which might include rooftop or field solar PV, battery storage and diesel or gas-fired gen-sets. Military, public health or data centers cannot afford not to pay for grid redundancy that protects them in the event of a hurricane or tornado or polar vortex or power plant cyberattack.

Those microgrid projects are historically contracted to firms like Schneider Electric and keep growing in scope, so big money is getting into the picture. At the same time, though, the new-gen microgrid contracts are leaning toward the “energy as a service” model, in which the contractors fund the project, then recoup their investment when the customers pay for their long-term energy consumption on a regular basis.

Schneider Electric is pursuing the “EaaS” microgrid model on two fronts with two different funding partners. AlphaStruxure, a joint venture with Carlyle Group, is focused on major projects for the bigger, mission-critical sites. GreenStruxure, a partnership with Huck Capital launched in September 2020, will seek to provide microgrids for commercial, industrial and governmental medium-sized buildings in the U.S.

The concept of EaaS derives from the market innovations deployed by residential rooftop energy firms like Solar City. The company shifted the major upfront costs away from the consumer and focused on contracts to take all of those kWh generated by the panels.

“It moves all risk from someone who doesn’t specialize in solar to someone who does,” Haines said. “We saw that helped solar really take off. I think EaaS will do the same thing, and allows the general manager of a building to focus on what he or she does best” and leave microgrid construction, operation and finance to the experts in energy.

The shape of these next-level microgrids is also shifting from very specific site configurations to potentially more standardized modules which will allow for greater scale and, consequently, lesser cost. Repeatable solutions could prove key just like they have in automobiles and other mass-produced goods.

The components of the new microgrids also could morph somewhat as the business world and regulatory pressures push toward major emissions reductions in power generation. Solar PV and battery storage likely will be located in tandem, but the legacy of standby, diesel power may give way to gas-powered combined heat and power (CHP) plants, particularly where industrial customers are concerned.

“I think CHP will be the third most common DER (distributed energy resource),” Haines said. “CHP is really a valid way where a site needs electricity and heating or cooling.”

If carbon reduction is the goal, gas-fired CHP presents some environmental challenges. Haines conceded that point, but noted that if hydrogen continues its seemingly upward trajectory—and if that H2 is produced from electrolysis powered by zero-carbon energies—than hydrogen pipelines connected to CHP plants could overcome that CO2 barrier.

“There’s the potential for a soft transition to start blending green hydrogen into natural gas pipelines,” he added.

Original equipment manufacturers such as Mitsubishi Power, GE and Siemens, as well as on-site gen-set makers as Cummins and Wartsila, are working on accelerating the blend of hydrogen into their power generation turbines and engines.

As mentioned earlier, COVID-19 certainly caused some headwinds against the microgrid sector, as the pandemic has almost everywhere else. It also has forced companies to adapt and innovate. The coronavirus spurred some new thinking at a Schneider project in Hawaii.

The solar and storage microgrid was nearing the operational stage when the contractor typically sends a commissioning engineer to finalize it. COVID-19 was speeding eastward from China to the U.S. and Hawaii, caught in the cross-hairs, set a rule for a two-week quarantine upon arrival.

Schneider Electric had planned to transition into some remote commissioning in the near future, and the Hawaiian customer was dismayed that its project could not deploy without the final key checkmarks.

“We were willing to move this forward and work with you like a beta customer for the remote commissioning technique,” Haines recalled the conversations. “They said yeah…(and) this allowed our engineer to be sitting in his home office in North Carolina…and about May or so, we got the microgrid up and running for the first time.”

The digital tool used in the remote commissioning was not a specific Schneider product, but something that was bought off the shelf and offered a cybersecure VPN.

“We’re all learning,” Haines pointed out. “Prior to COVID, we thought you can’t have those meetings virtually, nothing else (but in person) will do. What we discovered is we could.”

(Rod Walton is content director for Power Engineering and POWERGEN+ online series. He can be reached at 918-831-9177 and rod.walton@clarionevents.com.)

Microgrids will be part of the August POWERGEN+ series on Decentralization and the New Energy Mix. Contact us if you are in the industry and have a project case study you would like to share with our audience. April’s POWERGEN+ will focus on Optimizing Plant Performance.