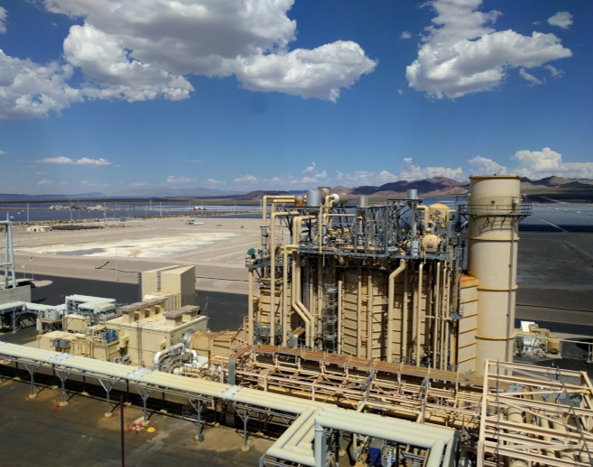 A three-year-old combined-cycle power plant in the Northeast with an ammonia-only steam generator chemistry treatment program was experiencing high iron concentrations throughout the steam cycle.   The plant has two natural gas-fired combustion turbines, each with a heat recovery steam generator (HRSG), dedicated steam turbine, and air-cooled condenser (ACC) in a 1 x 1 x 1 arrangement.  The HRSGs are triple-pressure units operating at 64 psi (low-pressure [LP] evaporator), 479 psi (intermediate-pressure [IP] evaporator), and 2,390 psi (high-pressure [HP] evaporator), with maximum steam output from each of 70, 77, and 675 thousands-of-pounds-per-hour (kpph), respectively.  Both HRSGs are of the stand-alone low-pressure drum (SALP) configuration, where the feedwater pump supplies each drum directly.

The feedwater target pH range is 9.8—10.0, which is consistent with all-volatile treatment oxidizing (AVT(O)) guidelines developed by such organizations as the Electric Power Research Institute (EPRI) and the International Association for the Properties of Water and Steam (IAPWS).  However, feedwater dissolved oxygen (DO) concentrations typically range from 20 to 30 ppb, which is somewhat higher than the normal recommendation of 5 to 10 ppb.  Iron residuals, particularly in the feedwater and LP drum circuits, were persistently high even with HRSG pH maintained within AVT(O) standards.  It should be noted that each HRSG is equipped with both a condensate and feedwater strainer to remove iron oxide particulates generated in the ACCs.

Feedwater pH at this plant is controlled by continuous, on-line specific and cation conductivity monitoring, a common feature in these types of applications.  Drum pH for all three evaporators is tracked with both on-line instrumentation and periodic manual analyses.  The alkaline pH range outlined above minimizes corrosion in many circuits; however, ammonia-only treatment makes some locations, particularly the LP evaporator, susceptible to flow-accelerated corrosion (FAC), which is caused by ammonia flash-off in this low-pressure circuit.  ACCs, with their massive size and extensive carbon steel piping, are also subject to significant FAC.  FAC concern was the primary reason for proposing a film-forming amine (FFA) product to supplement the AVT(O) program.

In addition to Millipore testing for iron particulate tracking, plant personnel also installed an on-line analyzer to accurately monitor iron concentrations in the LP drum.  This sample had the highest iron residuals prior to the trial, and ChemTreat and on-site staff believed the LP drum sample would provide the best understanding of how iron concentrations, and, therefore, active corrosion, responded to FFA application.

When a steam generator is placed in service, carbon steel piping and other components develop an oxide layer that protects the base metal.  Per the Schikorr reaction, this causes a magnetite (Fe3O4) layer to form. This passive film can be oxidized by dissolved oxygen to non-protective rust that may result in pitting and related corrosion.

For many years, the industry standard condensate/feedwater treatment program consisted of ammonia feed for pH control combined with oxygen scavenger feed to maintain the magnetite layer.  This program is known as all-volatile treatment reducing (AVT(R)).  However, following a fatal accident in 1986, and other accidents since, researchers have learned that the reducing environment produced by oxygen scavengers is the prime ingredient for single-phase FAC of carbon steel.  The attack occurs at flow disturbances such as elbows in feedwater piping and economizers; locations downstream of valves and reducing fittings; attemperator piping; and, most notably for multi-pressure HRSGs, low-pressure evaporators, where the waterwall tubes, aka harps, have many short-radius elbows.  In fact, FAC is typically the leading on-line corrosion mechanism in HRSGs.

FAC induces gradual metal loss, which can lead to sudden failure when the pipe wall is no longer able to withstand the pressure.

Several other factors influence FAC, most notably pH and temperature.

Based on the method of oxygenated treatment (OT) implemented for once-through steam generators in Europe in the early 1970s, EPRI developed a program to replace AVT(R) for utility drum units.  The revised method is known as all-volatile treatment oxidizing AVT(O).  If the condensate/feedwater system contains no copper alloys, which is true for virtually all HRSGs, then AVT(O) is strongly recommended instead of AVT(R).

With AVT(O) chemistry, oxygen scavenger feed is eliminated, and a small residual concentration (5—10 parts-per-billion [ppb]) of dissolved oxygen is maintained at the economizer inlet.  Ammonia is still utilized for pH control.  High-purity condensate (cation conductivity â‰¤0.2 µS/cm) is a requirement for AVT(O), but when proper conditions are established, magnetite becomes overlaid and interspersed with a tighter-bonding oxide, known variously as a-hematite or ferric oxide hydrate.  It is noticeable for its distinct red color.

However, in multi-pressure HRSGs, two-phase FAC can also cause problems in the LP evaporator.  If pH is controlled by ammonia only, the distribution ratio of ammonia at LP drum pressures allows 70—90% of the ammonia to escape with the steam, causing a pH depression of moisture droplets in the LP drum.  The dynamic conditions in the drum, coupled with these reduced-pH droplets, can initiate two-phase FAC, which was observed in the case introduced earlier.  A later figure in this article illustrates two-phase FAC.

FAC has contributed to numerous problems throughout the power industry, and this case is no different.  A further complication was that the plant’s operating guidelines did not call for LP evaporator blowdown.  This allowed the iron oxide corrosion products to accumulate in the LP evaporator.

The clear evidence of FAC in several subsystems of these steam generators provided the impetus for the FFA trial, with a focus on reducing bulk water iron concentrations by minimizing active corrosion and developing a consistent blowdown protocol to clean up previously generated corrosion byproducts.

To minimize potential harm, ChemTreat’s FFA product was applied at very low concentrations at first, with the intention of optimizing dosage rate based on measured iron concentrations.

Prior to the test, iron residuals would remain at approximately 500—1,000 ppb for several weeks after a unit startup.  Figure 4 below shows Millipore monitoring data from before and during the trial.

When the FFA product was introduced, iron concentrations increased immediately. The largest impact occurred in the LP drum, where the iron residuals increased from 100 to 1,000 ppb. This was expected, hence the low initial FFA dose.

FFAs function by binding with and acting on iron oxide layers. FFA is predominately a hydrocarbon, so when the amine group binds with iron, the hydrophobic hydrocarbon chain projects into the flowing water, creating tension on the oxide surface.  The typical oxide layer on carbon steel surfaces consists of two phases: a tight inner layer covered by a loose layer of deposits transported from elsewhere in the steam generator.  During initial FFA treatment, the outer layer detaches and accumulates in the boiler water circuits.  To control iron oxide buildups, proper blowdown procedures are necessary to help minimize oxide deposition on boiler internals.  Otherwise, these particulates can deposit on boiler tube surfaces and subsequently reduced heat transfer and establish potential sites for underdeposit corrosion (UDC).  UDC is often particularly problematic in units using a solid alkali such as tri-sodium phosphate or caustic for internal boiler water treatment.  Deposit removal requires a boiler chemical cleaning, which is never easy and can be particularly difficult in HRSGs with complex and closely spaced boiler tube networks.

Once the loose particulate iron is removed and the inner oxide layer is exposed, the FFA binds to the surface and establishes a film that barricades the metal from the fluid.  At this point, iron concentrations begin to decrease throughout the cycle.  With continuous but not excessive feed, the FFA layer builds in density and strength and can be optimized based on iron measurements.  Unlike non-amine film-forming products, the high bond strength of the FFA to the metal surface makes it very effective during layups, even over extended periods.

During the trial, iron monitoring and visual inspections verified FFA efficacy.  Figure 4 has already illustrated some of this data.

A Swan nephelometer was also used to provide precise measurements.  Figure 5 comes from that instrument and shows that after a couple of weeks of operation at the initial FFA residual, a decrease in iron residuals during starts, stops, and load transitions was evident in the LP drum.

After steady treatment was established, the LP, IP, and HP drum iron concentrations all dropped to an average of less than 5 ppb.  Similarly, during typical unit startups, iron residuals fell below 50 ppb in the LP drum within 10 minutes and 5 ppb within 2 hours (Figure 6), a dramatically improved result over previous operation.

During visual inspections prior to the trial, plant operators and test personnel noted a buildup of loose iron oxide over the entire internal drum surfaces.  Piles of loose iron oxide were also noticeable on the drum bellies. After treatment, the loose piles of iron were greatly diminished, and the iron dusting on the drum walls disappeared.  A slightly more adherent oxide layer persisted but was less apparent with increasing exposure to treatment.

After FFA applications, the turbine exhaust duct had less exposed carbon steel, no loose iron, and no tiger stripe pattern (indicative of two-phase FAC) in the turbine exhaust duct (TED), shown in figures 7 and 8 below. The iron particulate volume at the bottom of the condensate receiver has been lowered from 2 to 0.5 gallons, further indicating the reduction in suspended iron concentrations.

Figures 9 and 10 below offer direct visual evidence of Millipore tests before and during the trial.  From the start of treatment until the preparation of this article 17 months later, a 99.5%, 89.6%, and 70.7% decrease in iron concentrations has been observed in the LP, IP, and HP drums, respectively.  Per mass balance calculations, this equates to a decrease in iron corrosion byproducts of 411, 43, and 29 pounds per year in these evaporators, respectively.

The data confirms that FFA application has reduced carbon steel corrosion and iron oxide corrosion product transport throughout the cycle at this facility. It is also clear that, compared to the ammonia-only program, FFA treatment is far superior in controlling FAC throughout the condensate/feedwater circuits and those areas prone to two-phase FAC, most notably the LP evaporators and ACCs.  Given that FAC is an extremely localized corrosion mechanism that causes wall thinning in very concentrated spots, programs that minimize FAC are critical for minimizing forced/unplanned outages, and most importantly, protecting employees from potentially hazardous failures.

As you know, all systems are different.  Like all other technologies, due diligence is necessary to determine the feasibility for utilizing methods.  Always consult your equipment manuals and guides.

The results of the case study discussed in this article are not guaranteed. They are examples only. Actual results may vary.

About the author: Dale Stuart is technical services consultant at ChemTreat. During his 21-year career there, Stuart has worked as a senior research consultant, chemist and group leader. He is a graduate of the universities of Virginia Commonwealth and North Carolina.

Optimizing Plant Performance is the theme of next week’s POWERGEN+ series. Click here to find out more.