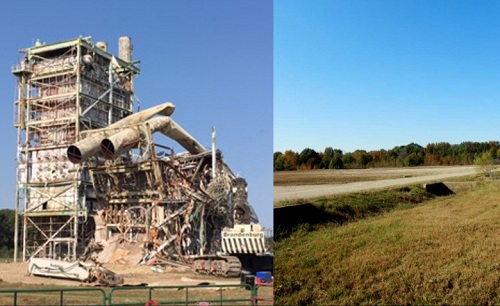 For 62 years the twin boilers and smokestack of the Moses Power Plant were an imposing landmark on the horizon just west of Forrest City, Ark. As of Dec. 1, the 231-acre site is, once again, an open field, save for a substation.

Contract crews spent much of this year demolishing the plant and removing the pieces.

Built in 1951, the Moses plant was state-of-the-art in its day. But by 2013 the natural-gas-fired facility had reached the end of its useful life, and the company retired it, replacing the kilowatts it generated with electricity from newer plants powered by nuclear, coal, natural gas and, lately, solar.

Removing a power plant from the landscape is no small task. Contractors have been on site since May 4 doing prep work, asbestos abatement, structural tear-down and removal of every shred of wood, steel and concrete. Unlike the previous three plant demolitions in Arkansas, the Moses project did not involve explosives, as were used at the Ritchie Plant in Helena, the Lynch Plant in North Little Rock and the Couch Plant in Stamps.

The property is now considered a “brownfield” site, meaning it is suitable for some other uses, though none have, as yet, been identified.

Any surprises in the process? Project manager Greg Tinin said workers were perplexed to find a snake had made its home in the top of the Unit 2 boiler. It was safely relocated.

Which is not to say it was easy. According to Tinin, “The asbestos abatement in each of the boilers occurred during the heat of the summer. The boilers were fully contained in a poly exterior wrap under a negative pressure the entire time, 24 hours a day, until all of the asbestos was removed and certified clean by a third party. The workers had to wear Tyvek suits, hard hats, safety glasses, steeltoe footwear, gloves and respiratory protection while inside the containment. We decided to adjust the work hours to a start time of 4 a.m., knocking off at 2:30. We performed the most strenuous activities in the early morning hours at the highest elevations of the boilers. As the temperatures increased during the day, the activities shifted to lighter in effort and lower in elevation. We were able to complete removal of the asbestos from both of the boilers without any personnel suffering from heat-related illnesses.”

Then came the fluke of a hurricane hitting Arkansas. “In late August we prepared the boiler containments and the surrounding area for the effects of Hurricane Laura.  We encountered some 40 – 50-mph wind gusts with no breach of either containment,” Tinin said.

The facility was named for Hamilton “Ham” Moses, who was attorney for Harvey Couch, founder of Arkansas Power & Light (later Entergy Arkansas). Moses succeeded Couch as president of AP&L when Couch died in 1941. Read his colorful history in the Encyclopedia of Arkansas.

Looking back, Tinin said, “I had the privilege to work with a team of dedicated individuals who focused on keeping each other safe throughout the project, which allowed the Hamilton Moses demolition to be completed safely and successfully.”