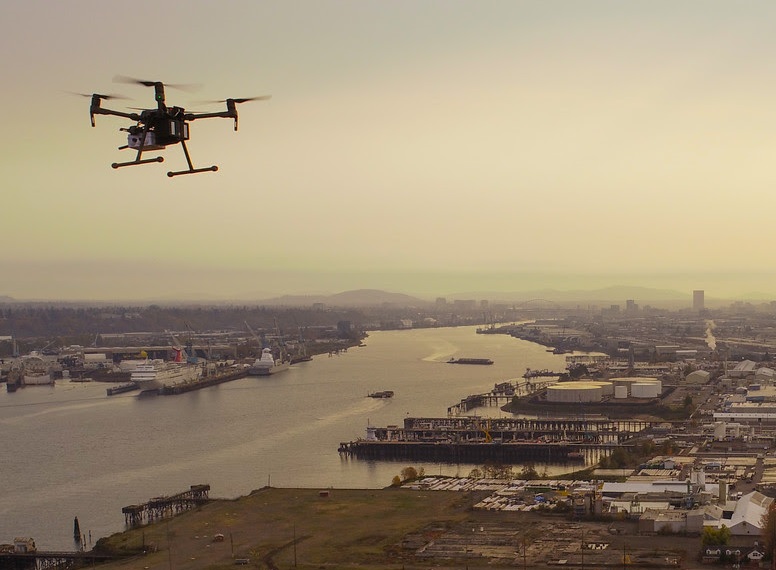 America’s infrastructure is past its prime. The American Society of Civil Engineers gives it a D+ grade. The ASCE notes that many bridges, roads, the energy grid, railways, ports, airports, and water systems are past their designed lifespans. But maintaining infrastructure takes investment. For the decade spanning 2016 to 2025, we’ve managed to allocate less than half of what’s needed to maintain and repair surface roads and bridges alone. That leaves a gap of $1.1 trillion.

The work is expensive and slow, and it can be unsafe. Workers must drive remote roads, trim trees, climb towers, and work near high-speed traffic. And, they’re on the front lines after a natural disaster.

Using drones to inspect infrastructure is part of the solution to the backlog. More importantly, drones can help us dramatically improve our preventive maintenance going forward. Drones can help to scope work faster and deliver better quality data regarding needed repairs. Plus, they’re safer than most alternatives and usually cost less.

Drones make it a lot easier to check interstate bridges for cracks, survey thousands of miles of transmission and distribution lines, monitor pipelines, and so much more. Here are eight examples of how drones are helping public agencies and engineering firms save money on infrastructure inspections, across the electric power, transportation, oil and gas, renewables, and water system sectors.

1. Drones for transmission and distribution lines

Engineers and field workers already use drones for many aspects of utility operations, including power line inspections. The cost savings are significant. During post-Hurricane Maria restoration work in Puerto Rico, a drone team from Southern Co. used drones to pull 72,000 feet of rope for conductor wire. Work that in the past would have taken six to eight months took just eight weeks.

We can expect even more efficiencies (time and money) as beyond-visual-line-of-site (BVLOS) inspections for transmission and distribution lines become mainstream for monitoring the millions of miles of electric lines crisscrossing the country.

The cost of a single under bridge inspection vehicle (UBIV), required for traditional inspections, runs between $500,000 to $1 million, with per day operations ranging from $2,000 to $3,500. Lane or shoulder closures to accommodate this equipment adds between $500 and $2,500 per day to the cost. The Minnesota Department of Transportation found that using drones for bridge inspection offsets some or all of these costs depending on the bridge configuration and location. Their trial of drone-assisted inspections saved an average of 40 percent over traditional methods, and provided far superior data and reporting, like 3D modeling, which is leading to more informed decisions on investments in bridge maintenance, repair, and rehabilitation. 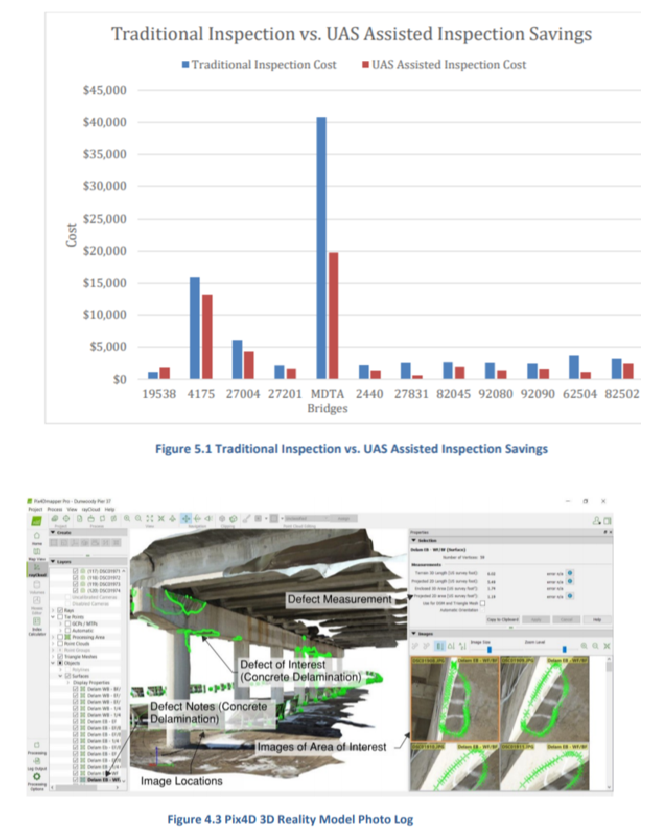 3. Drones for oil and gas pipelines

Oil and gas (O&G) and produced water (a salty byproduct of oil refining) are routinely transported through 10 million kilometers of pipelines worldwide. The global O&G industry spends $37 billion a year monitoring the above- and below-ground pipes.Drones can reduce traditional surveilling costs by nearly 90 percent, prevent environmental disasters, and head off property damage. Contamination from produced water leaks, for example, kills vegetation and can ruin an entire crop on farmland, with clean-up costs in the hundreds of thousands of dollars. Drone inspections can swiftly survey hundreds of miles of pipeline, producing aerial imagery that pinpoints landscape changes that indicate pipeline leaks. Such early leak detection by drones is saving one Oklahoma pipeline owner up to 90 percent in remediation costs.

A global consulting firm estimates drones cut the cost of thermographic inspections of utility-scale solar farms between 30 and 40 percent. Data collection using infrared imaging for a 75 MW, 500-acre facility lowers inspection time from about a month to about a week, with fewer workers.

Drones mounted with infrared thermography allow wind power generators to examine blades inside and out, an advance leap over manual and ground-based camera inspections. One global UAS solutions provider delivers drone inspections of wind turbines at 30 to 50 percent lower cost than traditional methods. 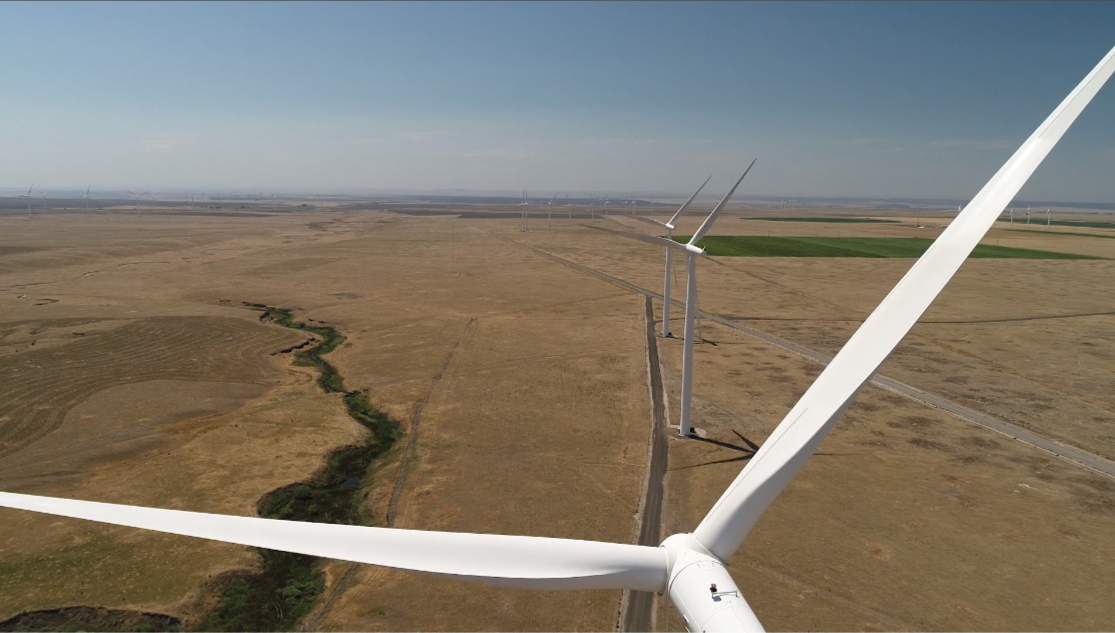 7. Dams and other water system structures

Aqueducts, hydroelectric equipment, fish ladders on older dams, reservoirs, culverts, canal locks, and treatment plants are all essential infrastructure than can benefit from drones. Collecting dense point clouds by drones is an ideal application for dam inspections, and any structure with a complex shape. The highly accurate 3D and photographic models generated allow managers to keep eyes on the hardest-to-access places and move to a more proactive, predictive maintenance model. One Italian use case suggests inspection costs can be reduced by 40 to 60 percent as a result. 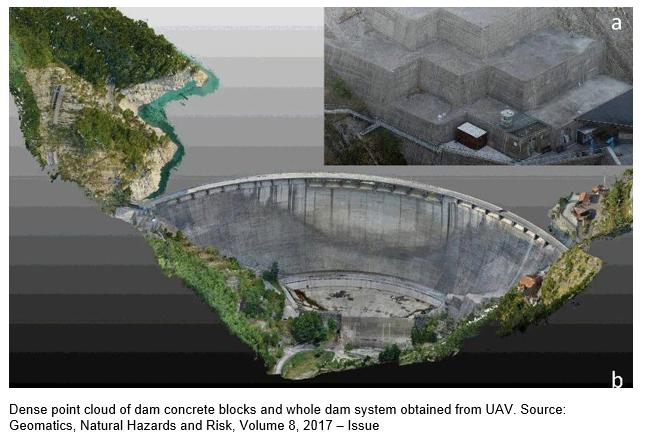 Rail inspection was one of the first approved uses of BVLOS inspections in America. The U.S. alone has 170,000 miles of track (not to mention bridges, poles, yards, etc.) that require regular safety checks for wear and tear, vegetation management, rock falls, security, and post-weather-event evaluations. Drones dramatically speed up these inspections as well as topographical surveys done for new track and structures. Eliminating the need for “possessions” (traffic shutdowns during inspections) and reduced labor costs (the average rail inspector salary is nearly $74K) are two big areas of savings.

Beyond cost savings: drone inspections are a revenue play

As drones mature as a technology, government agencies, utilities, and enterprises charged with running infrastructure will look beyond its cost and risk benefits to drones as a revenue opportunity. Solar utilities will improve energy production based on more granular data from drone inspections; one generator estimated $42,000 in additional revenue resulting from repairs typically missed by a manual inspection.Reduced downtimes for wind turbines will improve output by over 75 percent according to one estimate.

And connected drones, powered by emerging 5G technology, will open up new opportunities for infrastructure inspections and maintenance no one’s yet thought of, making BVLOS, autonomous flights, and remote deployments part of regular operations.

Weather-related power outages, coupled with aging infrastructure, cost the U.S. economy an inflation-adjusted average somewhere between $18 billion and $75 billion per year. The mega-storms that are becoming more common skew this to the high end.Utilities, government agencies, and private enterprises understand that deferred maintenance can’t wait any longer–and that ignoring things until they break will just cost us all more.

UAS provides infrastructure managers with better, faster, cheaper data that helps them identify components and structures at highest risk of failure. Drones make it possible to do inspections a lot more frequently, an important factor for aged infrastructure. Applied broadly, drone technology can hasten the big fixes that are needed.

About the author: Ryan Wall is director of business development and strategic planning at Skyward, A Verizon company. He enjoys collaborating with enterprises to help them stand up successful drone programs. For more than a decade, Ryan has served in the Air National Guard, where he is currently an egress systems craftsman.