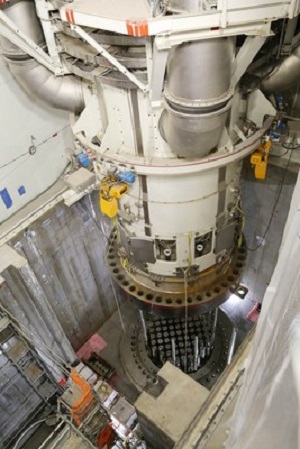 The utility and its parent Southern Nuclear, lead partners on the $25 billion construction effort, announced this week that the integrated head package for Vogtle Unit 3 has been set in place atop the reactor vessel. This complex component will be used to monitor and control the nuclear reaction inside the vessel.

The construction effort in Waynesboro, Georgia, goes on despite a previous alert by Southern and Georgia Power that impacts of COVID-19 could hit as much as 20 percent of its workforce. The partners–with Bechtel leading the EPC efforts–hope to place Unit 3 into operation next year and Unit 4 in 2022. It will be the first new nuclear capacity brought online in the U.S. in many years.

The integrated head package stands 48 feet tall, weighs 475,000 pounds and contains more than three miles of electrical cables. Currently, the project’s operators are monitoring and controlling the technology and equipment essential for testing the unit’s systems and safely starting the plant.

This milestone brings the unit another step closer to loading nuclear fuel inside the reactor, according to the Georgia Power release.

Last month, publicly traded parent company Southern Co. alerted the U.S. Securities and Exchange Commission that it would reduce workforce 20 percent to enable social distance practices at the Vogtle site. The changes could add another $15 million to $30 million in costs, but that’s barely one tenth of one percent compared to the long-term project’s overall cost.

The project workforce has been as high as approximately 8,000 workers on site. With more than 800 permanent jobs available once the units begin operating, Vogtle 3 & 4 is currently the largest jobs-producing construction project in the state of Georgia, according to the utility.

The Vogtle Units 3 and 4 addition has run into multiple snags along the way, including cost overruns and environmental opposition. Some owners of the only U.S. nuclear reactor construction project ongoing actually considered abandoning it in 2018, but moved ahead with financing and encouragement from the U.S. Department of Energy.

Georgia Power leads the project ownership, which also includes Oglethorpe Power, the Municipal Electric Authority of Georgia and Dalton Utilities. The U.S. Department of Energy has approved up to $12 billion in loan guarantees for the project.

Nuclear power, which does not produce carbon emissions, currently accounts for 19 percent of the U.S. electricity generation fuel mix.

Nuclear energy will be part of the Lowering Carbon Emissions with Thermal Power track in the POWERGEN International Conference Workshops. POWERGEN 2020 is planned for December 8-10 in Orlando, Florida.