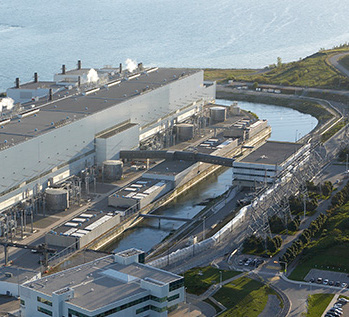 The 10-year license allows OPG to do work aimed at preparing the site for construction of a future SMR nuclear plant, called the Darlington New Nuclear Project. Darlington (pictured) also is the site of a current, massive-scale nuclear power plant.

“OPG has the experience and expertise to lead the way on this next generation of clean energy, and we look forward to having an SMR in place in time to help meet future energy demands,’ OPG CEO Ken Hartwick said in a statement. “We are pleased to receive CNSC approval to take the next steps in this direction.”

The Canadian utility hopes to deliver the SMR plant by 2028.

See our complete coverage of SMRs and the nuclear power sector

A study undertaken by the Conference Board of Canada shows strong economic benefit to Ontario from construction and 60 years of operation of a 300-MW SMR plant in the province. According to the report, direct, indirect and spin-off related employment would result in an annual average of approximately: 700 jobs during project development; 1,600 jobs during manufacturing and construction; 200 jobs during operations; and 160 jobs during decommissioning. It would have a positive impact on direct, indirect and induced Gross Domestic Product of more than $2.5 billion and result in an increase of provincial revenues of more than $870 million.

The provinces of Ontario, New Brunswick, Saskatchewan and Alberta have signed a memorandum of understanding to collaborate on the advancement of SMRs as a clean energy option to address climate change and regional energy demands, while supporting economic growth and innovation.

Further federal approvals will be needed to completely build and commission the project.