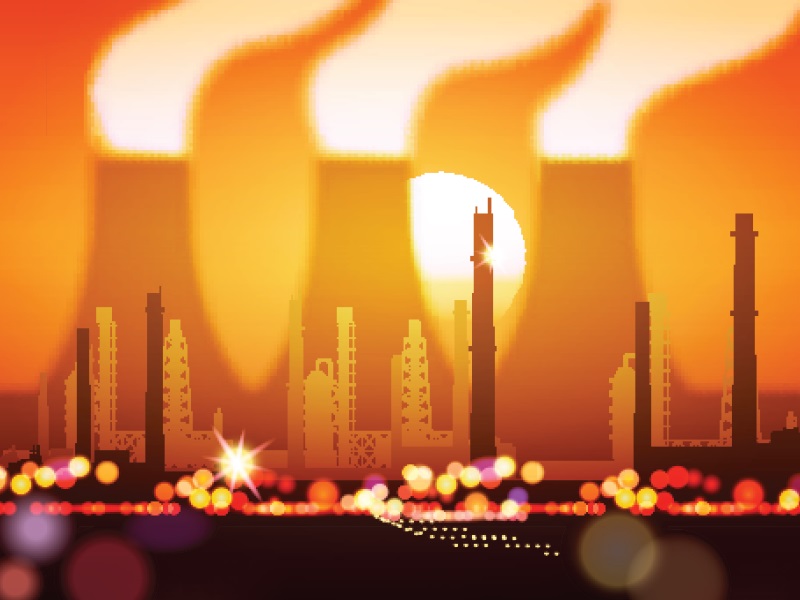 By Ondrej Chvala, Research Assistant Professor in the Department of Nuclear Engineering at the University of Tennessee/special to Power Engineering International

Why molten salt reactors could offer a revolution in clean energy.

The world has undergone the largest decrease of global poverty in the past few decades. Over 100 million people have been connected to the electric power grid every year since 2010.

This growth has been accomplished mostly by increased reliance on burning fossil fuels. Various quality of life indicators across all countries suggest that an average total energy consumption rate of about 5kW per person is required for decent standards of living.

Taking into account the expected population growth, lifting the global population from poverty to modern comforts will likely require a global energy consumption three to five times our current consumption.

At the same time, we have to significantly reduce our production of greenhouse gases to avoid catastrophic climate change impacts. Since the growth of energy consumption happens in a developing world that cannot afford to overpay for energy, this rapid increase of energy production has to be fundamentally cheaper than fossil fuels.

— — — — —
This article was originally published in Power Engineering International Issue 1-2021. Read the mobile-friendly digimag or subscribe to receive a print copy.

Here we have arrived at the quandary of sustainability. To globally sustain modern civilization, we need an energy source that is emissions-free, scalable, reliable, and cheaper than coal — and we need it fast. In the early days of the nuclear age, it was thought that light water reactors (LWR), which comprise most of the current nuclear fleet, were not scalable due to the perceived scarcity of uranium. Since then we have realized that uranium is much more plentiful, and thus instead of transitioning to various advanced (and more efficient) reactor concepts, we stuck with the current technology. Perhaps now is the time to rethink nuclear power.

Molten salt reactors (MSRs) present a new approach to industrial fission power. The nuclear fuel is dissolved in a high-temperature alkali-halide melt, such as lithium fluoride or sodium chloride, and circulates about the primary loop between the fissioning core and primary heat exchangers.

This has several fundamental advantages compared to existing LWR technology. First, the system provides high temperature heat, over 600°C, about twice the LWR outlet temperature. Second, the molten salts remain liquid at atmospheric pressure up to ~1400°C, so the system can operate at low pressure. Third, pairing alkali metals with halogens results in strongly bounded compounds with no chemical energy left for rapid reactions.

Fourth, molten salt is an ionically bonded liquid, which does not suffer radiation damage, unlike covalently bonded solid fuel, so the fuel does not degrade over time.

Fifth, the molten salt is exactly the chemical medium amenable for partitioning and extraction of valuable elements, in particular isotopes for medical and industrial application. Sixth, the liquid fuel in continuously mixed and homogenized as it circulates about the loop, eliminating potential hot spots. Seventh, the molten salts dissolve uranium, thorium, and plutonium, offering fuel flexibility. And last but not least, the liquid fuel is much easier to cool in the event of station blackout, eliminating potential for meltdowns.

In short, MSRs offer a high-temperature low-pressure system that can be refueled as it operates, without limitations of fuel lifetime, with relatively cheap thin-walled structural components, no chemical or pressure driver to spread the radionuclides, potential for full passive safety, and the possibility for additional revenue streams from valuable medical isotopes.

The basic technology of molten salt reactors was developed at the Oak Ridge National Laboratory (ORNL) in the 1950s-70s, where three MSRs were constructed and operated under Dr. Alvin Weinberg’s leadership. He coined the MSR promise as “burning rocks” in “a pot, a pipe, and a pump”.

The most notable system was the Molten Salt Reactor Experiment (MSRE), a graphite-moderated fluoride salt fuelled reactor, which operated in 1965-69, and served as a small 8MW technology development platform. At the end of that operation the ORNL researchers were confident in the merits of the technology, developed several conceptual designs of commercial-scale demonstrators and expected to proceed with construction in the 1970s.

Due to changes in priorities of governmental funding the ORNL MSR program died instead. In 2001, the MSRs were recognized by the Generation-4 International Forum as one of the next-generation reactor concepts with improved safety, cost, and efficiency.

Since then there has been a significant international revival in interest in the MSR technology, primarily in North America, Europe, Russia, and China. The Chinese program is the most ambitious. Officially started in February 2011 at the Shanghai Institute for Nuclear and Applied Physics (SINAP), it managed to replicate most of the past ORNL technology. In 2017 SINAP researchers announced a goal for their first demonstrators by 2020, which was apparently delayed by the COVID-19 pandemic.

In the US and Canada, several private companies were started after 2010, many aiming at developing demonstrators by the end of this decade. There is a large diversity in MSR concepts pursued by these developers.

Flibe Energy is developing a two-fluid thorium fueled breeder, the Liquid Fluoride Thorium Reactor (LFTR), which was the original aim of the ORNL program. Thorcon Power aims for a system most similar to the MSRE, but with the shipyard construction, and targets Indonesia as its first market.

Terrestrial Energy is developing the Integral Molten Salt Reactor (IMSR), which integrates the reactor and heat chargers into a sealed replaceable vessel. TerraPower, backed by Bill Gates, is working on a chloride salt fuelled reactor without a moderator, the Molten Chloride Fast Reactor (MCFR).

Kairos Power uses a fluoride salt to cool solid fuel in the form of pebbles first invented for high-temperature gas-cooled reactors. This is not an exhaustive list, but illustrates the variety of technologies pursued due to different engineering trade-offs.

Nuclear energy is one of the most regulated areas of human activity, for good reason. These regulations are tailored to existing technology. Developing new regulations requires topical experts. Until recently, molten salt technology was neither taught nor well known in the field of nuclear engineering. Tools used to model nuclear reactor physics have not considered flowing fuel.

We need a better understanding of chemistry and the thermophysical properties of hot molten salts with dissolved actinides and fission products. The compatibility of molten salts with structural materials needs to be proven and methods for fissile material accountancy and control need to be developed for liquid fuel to satisfy international and domestic safeguards.

Valves, flanges, pumps, off-gas systems, various sensors and detectors need to be engineered and demonstrated. Universities, national laboratories, and the MSR developers are developing the necessary expertise, tools, and workforce, with private and US Department of Energy funding. That said, we have built and operated MSR systems already, in the 1950s and 60s. The real challenge is to be economically competitive with fossil fuels. Many believe this is the best realistic option.

Sustaining our technological civilization likely requires a new energy source that is significantly better than those currently available. MSRs offer a novel approach to fission, a high-temperature heat delivered from an inherently safe low-pressure system, the possibility of consuming undesirable actinides in the spent nuclear fuel and plutonium stockpile, and production of desirable medical isotopes. Passive safety, high-temperature heat production, and consummation of nuclear waste are significant factors, which will help with both economic viability and public acceptance.