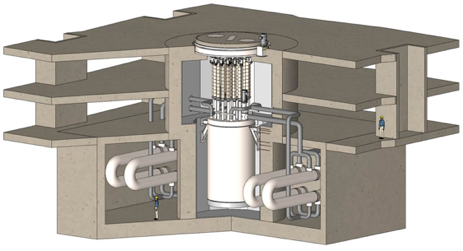 The Tennessee Valley Authority is showing its future commitment to carbon-free nuclear power by collaborating on a next-gen and smaller reactor technology demonstration.

TVA and Kairos Power are planning to team up on deploying a low-power, salt-cooled reactor at the East Tennessee Park in Oak Ridge.

Kairos Power, which grew out of multi-partner research efforts earlier this century, will utilize its Hermes reactor for the demonstration. Hermes is a fluoride salt-cooled, high-temperature reactor. (Rendering courtesy of Kairos Power above).

“Teamwork is the hallmark of the nuclear industry, and through this partnership with Kairos Power we can share TVA’s safety and innovation insights to advance nuclear technology while gaining experience with licensing for advanced reactors,” said TVA President and CEO Jeff Lyash. “Nuclear power is the key to fueling our economy with reliable, affordable, and clean electricity, and it is critical to our national security.”

See our full coverage of the nuclear energy sector

TVA generates more than 40 percent of its electricity from nuclear power and has one of the largest reactor fleets in the U.S., according to reports.

Kairo’s advanced demonstration rector will use TRISO fuel in pebble form combined with the low-pressure fluoride salt coolant. The steam cycle helps convert fission into heat to electricity and be flexible to complement renewable energy resources.

“We look forward to collaborating with TVA, and drawing upon the well-versed knowledge and expertise of their team,” said Mike Laufer, Co-Founder and CEO of Kairos Power. “Kairos Power and TVA have a shared commitment to improving people’s quality of life and pursuing innovation through advanced nuclear that provides reliable, clean energy for the future.”

The TVA was the first utility nationally to receive NRC approval for an early site permit related to small modular reactors. The 20-year permit would allow TVA to begin planning on whether to build and operate a potential 800-MW facility near Oak Ridge, Tenn.