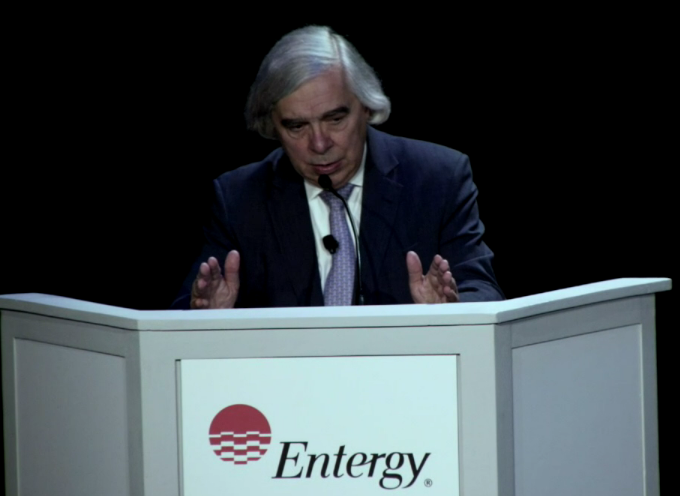 NEW ORLEANS-Former U.S. Secretary of Energy Ernest Moniz, speaking in a city often blasted by extreme weather events, told the audience at a clean energy forum that the time for dealing with climate change through carbon reduction is immediate and needs to be dealt with at the top.

“This is an issue of political accountability and we don’t have time for this to go on,” Moniz, who served as President Obama’s Energy Secretary from 2013-2017, said during the Forum on a Clean Energy Future for New Orleans. “We are delaying.”

New Orleans-based Entergy and the Tulane Energy Institute sponsored the event featuring numerous local, national and utility leaders. Entergy is the host utility for POWERGEN International, which will be Nov. 19-21 in New Orleans.

A webcast of the forum was provided by Entergy.

Moniz, who became CEO of the board for the Nuclear Threat Initiative once leaving office and is a nuclear physicist by trade, offered up that energy resource as a critical piece of the carbon reduction puzzle within the energy sector. Without zero-carbon nuclear energy, he noted, “we are trying to get to net-zero carbon with one less tool.”

Earlier in the Forum, Entergy Corp. Chairman and CEO Leo Denault also touched on the need for a nuclear power generation future. Entergy owns and operates close to 9,000 MW in nuclear generation capacity.

“We have an all-of-the-above strategy” toward carbon reduction, Denault told the crowd. The goal is not purely a renewable energy strategy but a carbon-cutting one, he added.

The company has closed nuclear plants, but also plans to extend licensing for several facilities.

“We do believe that nuclear, gas and renewables play a role going forward,” the Entergy CEO said. “Nuclear is a very important part of the climate issue.”

Indeed, both Montiz and Denault also spoke highly for the role for natural gas in carbon reduction. Entergy is on a building campaign that adds gas-fired generation to replace high carbon-emitting, coal-fired plants, and it recently put the nearby St. Charles combined cycle gas turbine facility into operation.

“By 2030, when we’ll have retired the majority of our coal fleet, we will have replaced it with new gas and renewables,” he said.

These new moves have to be done with affordability in mind, considering the region’s high percentage of both manufacturing plants and low-income residential customers.

“We need to be competitive for them (commercial and industrial customers),” Denault added, also noting that 35 percent of its residential customer base has annual income of $38,000 or less. “And we owe it to them.”

Moniz has spoken nationwide in favor of the so-called “Green Real Deal,” a massive plan to dramatically increase and accelerate the nation’s clean energy portfolio. And while solar and wind capacity play a huge role in those goals, he also acknowledged that affordability and a multi-pronged approach utilizing numerous resources is important.

“We need to build the biggest coalition that we can,” Moniz said, including natural gas-fired generation as part of that. “In our view a critical element of that transition does remain natural gas. Natural gas in this country has caused a revolution that has led to a majority of our carbon reduction.”

Denault noted that New Orleans and the Gulf Coast certainly face the impacts of climate change more than most areas. In addition to the human cost, Entergy has more than $30 billion worth of assets deployed within the region.

He cited Entergy as the first U.S. utility to voluntarily limit greenhouse gas emissions in 2001. By 2030, Denault forecast, the company should have decreased its carbon dioxide emissions rate to half of the 2000 level.