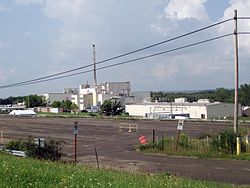 Energy infrastructure engineering firm Jacobs has gained a 39-month extension on its contract to deactivate and demolish buildings at a decommissioned nuclear fuel reprocessing plant in New York.

The West Valley Demonstration Project is a long-term remediation effort at the site which was decommissioned beginning in 2011. Jacobs is leading a joint venture which includes CH2M, Hill and BWXT.

The purpose of the extension is for the joint venture team to complete deactivation, demolition and removal of the last major facility standing at the site-the main plant processing building (MPPB).

The team has demolished 44 of 47 site facilities so far, as well as cleanup efforts at the West Valley Demonstration Project. Jacobs led a major milestone in late 2018 when the 10,000-square-foot vitrification plant was demolished and legacy waste was disposed.

The company called it the largest and most complex environmental cleanup of the entire effort. The CHBWV team has completed 98 percent of the deactivation work required before the MPPB can be demolished.

“The Jacobs team has performed impressive and impactful work at the site and around the West Valley, New York community for the past 10 years,” said Jacobs Critical Mission Solutions North American Nuclear Senior Vice President and General Manager Karen Wiemelt. “I’m confident in our ability to continue to perform and exceed expectations throughout the contract extension.”

The West Valley Demonstration Project was created by Congress after the site was abandoned in 1980, according to reports. The site was called Western New York Nuclear Service Center and was charged with handling commercial spent nuclear fuel for reprocessing.