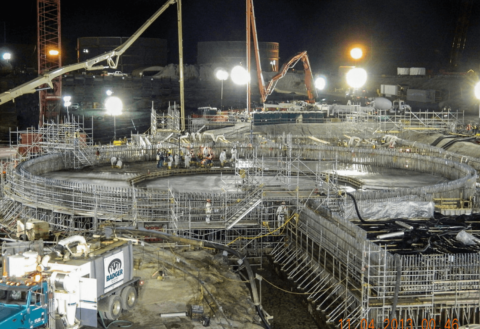 COLUMBIA, S.C. (AP) — South Carolina’s state-owned utility appears to have survived four years of turmoil to remain public after the South Carolina House and Senate both unanimously approved an overhaul bill Tuesday that does not include its sale to a private company.

Santee Cooper’s future has been uncertain since July 2017, when construction of a pair of nuclear reactors in which the utility was a minority partner stopped before completion, leaving the company billions of dollars in debt. Read more about the abandoned V.C. Summer project …

Republican Gov. Henry McMaster and several powerful legislators, especially in the House, almost immediately demanded the sale of Santee Cooper to a private company, saying South Carolina should not be in the power business.

But there were powerful allies on the other side who recalled how the founding of Santee Cooper as a public utility during the Great Depression brought power to wide swaths of rural South Carolina. They also noted the state-owned company’s willingness to do whatever top officials asked to bring big industry to the state.

Company officials asked lawmakers for time to reform and come up with a plan to reduce their debt.

The Santee Cooper supporters won. McMaster said he wants to read it before deciding whether to sign it, but his action is mostly symbolic, as the 111-0 House vote and 43-0 Senate vote are veto-proof.

“This product is one of negotiation,” said Sen. Luke Rankin, a Republican from Myrtle Beach. “It’s one of everybody trying, I think in good faith, to make Santee Cooper what it should be and to move past the decision that it made — that we as a state made — to go nuclear.”

The bill does shake up Santee Cooper’s leadership. Over the next four years, it ousts nine of the 10 members on the utility’s board, all of whom were serving before the nuclear reactors were abandoned by majority partner South Carolina Electric & Gas in 2017. It also restricts severance packages for any executives who lose their jobs.

House Speaker Jay Lucas, one of those who pushed hard to sell the company, said the provision was essential in order to get rid of “arrogant, entrenched insulated leadership.”

The proposal gives state regulators more power over the utility. It allows them to review the utility’s future plans to generate power and their forecasts for power, and to require public hearings and a watchdog to question utility executives about rate increases.

The bill extends the legislature’s current special oversight of Santee Cooper through the end of this year, when regulators with the Public Service Commission and public watchdog group the Office of Regulatory Staff should be ready to take over the task.

“This legislation brings to an end the unquestioned autonomy of an unaccountable board that for too long has been allowed to make poor decisions that others have paid for,” said Lucas, a Republican from Hartsville. He called the proposal “the most dramatic shift in policy at Santee Cooper since its creation.”

The House wanted to create a committee of lawmakers that could always be available to accept an offer to buy Santee Cooper, which the Senate rejected.

South Carolina spent $15 million trying to sell Santee Cooper with an intricate bid process that attracted 10 companies. NextEra Energy of Florida was picked as the best bid, but lawmakers rejected it, calling the offer underwhelming.

South Carolina Electric & Gas appeared to be on the brink of bankruptcy after the nuclear debacle, but was bought by Dominion Energy of Virginia. Two of SCE&G’s executives pleaded guilty to lying about the progress of construction to keep investors and regulators from realizing the problems. Both are awaiting sentencing in federal court.

Fifteen years ago, Santee Cooper survived another push to sell it to a private company by then-Gov. Mark Sanford.

Santee Cooper provides power to about 2 million of the state’s 5 million people, either directly or through selling power it generates to about two dozen electric cooperatives and local governments.