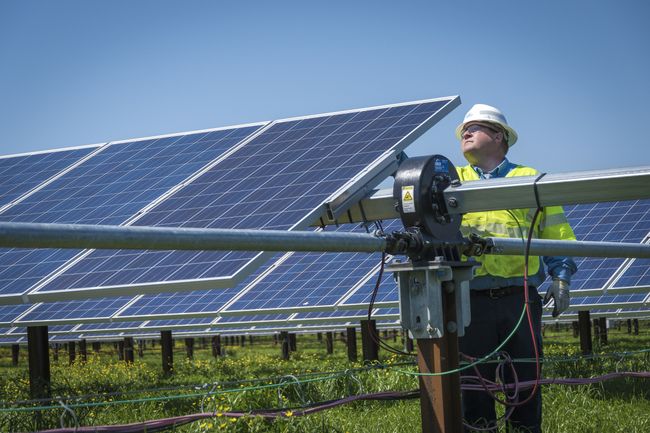 WASHINGTON (AP) – The $1 trillion bipartisan infrastructure package unveiled by the Senate includes more than $150 billion to boost clean energy and promote “climate resilience” by making schools, ports and other structures better able to withstand extreme weather events such as storms and wildfires.

But the bill, headed for a Senate vote this week, falls far short of President Joe Biden’s pledge to transform the nation’s heavily fossil-fuel powered economy into a clean-burning one and stop climate-damaging emissions from U.S. power plants by 2035.

Notably, the deal omits mention of a Clean Electricity Standard, a key element of Biden’s climate plan that would require the electric grid to replace fossil fuels with renewable sources such as solar, wind and hydropower.

One carbon-free power generation resource which may get a boost is nuclear power. For now, the bill includes tax credits for existing reactor-fueled plants, which could help utility firm Southern Co., which is guiding construction of the Vogtle Units 3 and 4 expansion in Georgia, the nation’s only current nuclear project in progress.

The White House says the bipartisan deal is just the first step, with a proposed $3.5 trillion, Democratic-only package following close behind. The larger bill, still being developed in Congress, will meet Biden’s promise to move the country toward carbon-free electricity, make America a global leader in electric vehicles and create millions of jobs in solar, wind and other clean-energy industries, supporters say.

While the bipartisan plan is “a good start,” lawmakers will “deal with the climate crisis in the magnitude, scope and scale that’s requiredâ€³ in the Democratic-only bill, said Sen. Ed Markey, D-Mass.

For now, the focus is on the bipartisan deal, which includes $550 billion in new spending for public works projects, $73 billion of that to update the electric grid and more than $50 billion to bolster infrastructure against cyberattacks and climate change. There’s also $7.5 billion for electric charging stations.

Citing the deadly Texas power outages earlier this year, the White House touted spending to upgrade the nation’s power grid and boost renewable energy. An Energy Department study found that power outages cost the U.S. economy up to $70 billion a year. The bill also invests in demonstration projects for advanced nuclear reactors, carbon capture and storage and so-called clean hydrogen that can be burned with few emissions.

Still, the measure falls far short of meeting Biden’s promise to address the climate crisis, even as triple-digit temperatures across the West caused hundreds of deaths this summer and a busy Atlantic hurricane season causes extensive damage.

“It is clear that the deal does not meet the moment on climate or justice,â€³ said Tiernan Sittenfeld, a senior vice president of the League of Conservation Voters.

“This looks like the Exxon Infrastructure Bill,â€³ said Janet Redman of Greenpeace USA. “An infrastructure bill that doesn’t prevent a full-blown climate catastrophe by funding a swift transition to renewable energy would kill millions of Americans.â€³

The bill offers “glimmers of hope” such as a multibillion-dollar commitment to clean up and remediate old oil wells and mines, Redman said, calling on Democrats to demonstrate “the courage to be visionary and go bigger” in the partisan bill expected later this year.

One of the lead negotiators, Sen. Rob Portman, R-Ohio, acknowledged that no one got everything they wanted in the bipartisan bill. “But we came up with a good compromise that’s going to help the American people,â€³ he said.

“This is about infrastructure,â€³ Portman said at the White House. “This is roads and bridges, but also lots of other kinds of infrastructure, including broadband, our water system and our rail system – all of which is good for the economy. This will lead to more efficiency and higher productivity, more economic growth.â€³