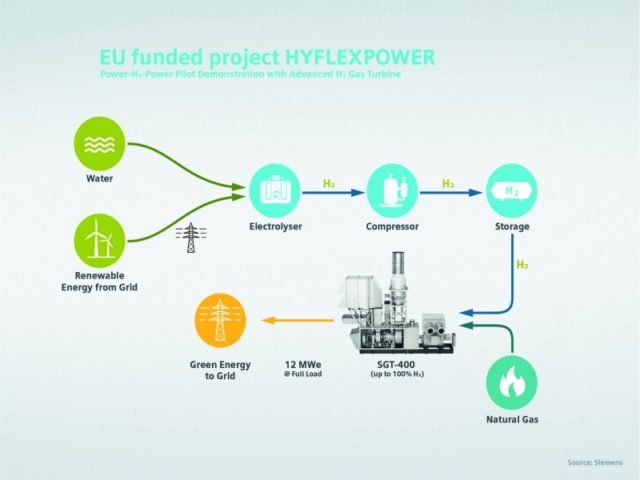 The €15.2m ($17m) project will mainly be funded by the European Commission under the Horizon 2020 Framework Program for Research and Innovation.

The implementation of this project, the world’s very first industrial-scale power-to-X-to-power demonstrator with an advanced hydrogen turbine, will be launched at a recycled paper manufacturing plant operated by Smurfit Kappa in Saillat-sur-Vienne, France.

According to the ADEME, France’s agency for environment and energy management, Power to X (or P2X) is the act of converting electricity into another energy vector. For the HYFLEXPOWER project, the “X” vector is hydrogen.

The purpose of the project is to prove that hydrogen can be produced and stored from renewable electricity and then added with up to 100 per cent to the natural gas currently used with combined heat and power plants. For this an existing Siemens SGT-400 industrial gas turbine will be upgraded to convert stored hydrogen into electricity and thermal energy.

The HYFLEXPOWER project hopes to demonstrate that renewable hydrogen can serve as a flexible means of storing energy which can then be used to power a high-power industrial turbine.

Storing fluctuating renewable energy is one of the major challenges of the energy transition. In this context, the stakeholders involved in the HYFLEXPOWER project are developing new technologies that they intend to be used across the whole power-to-X-to-power cycle. The installed demonstrator will be used to store excess renewable electricity in the form of green hydrogen. During periods of high demand, this stored green hydrogen will then be used to generate electrical energy to be fed into the grid.

Engie Solutions has been tasked with producing energy at the Smurfit Kappa site, where it operates a 12 MWe combined heat and power facility that produces steam for the manufacturing company’s requirements.

Siemens says that the conversion of existing infrastructure has the advantage of significantly lower costs and minimized lead time compared to a greenfield site. It adds that the project “will develop and demonstrate an advanced plant concept that will contribute to modernizing and improving the factory’s existing power plant”.

During two demonstration campaigns, the facility will be powered by a mix of natural gas and hydrogen, ultimately aiming for up to 100 per cent hydrogen operation. In this regard, the overall goal of the HYFLEXPOWER project is to test an entirely green hydrogen-based power supply for a completely carbon-free energy mix. This, says Siemens, would save up to 65,000 tonnes of CO2 per year for a SGT-400 at baseload operation.

The consortium selected following the call for proposals is made up exclusively of European companies and bodies. Each stakeholder’s role is defined as follows:

The project will last four years and will be split into several phases, the first of which was marked last month with contract finalization and the start of engineering development. The remaining phases are:

“Our goal is to make our gas turbines usable for 100 per cent hydrogen. With that, our gas turbines can be the ‘technology of choice’ for our customers to complement the intermittence of renewables and ensure a secure energy supply in the decarbonized world of the future.”

Pierre Hardouin, CEO of Engie Solutions for Industries, said the project demonstrates Engie’s “intent to support manufacturers and regions as they seek to optimize and green their energy use. Developing renewable hydrogen for industrial purposes is a perfect example. This demonstrator is the future.”

Harry Trump, Director of Business Development for Centrax, added: “Our goal is for our gas turbine combined heat and power systems to be ‘hydrogen ready’ to provide future-proof power generation solutions.”

(PamelaLargue is a senior content creator and editor and has been a part of the Clarion content team for over six years. She specializes in international power and energy-related content.