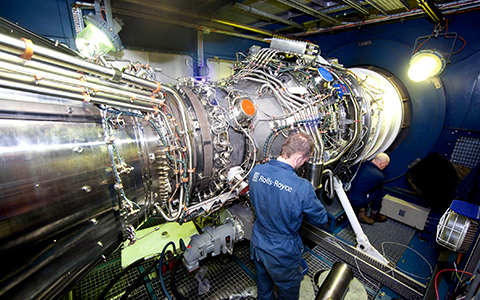 Rolls-Royce Power Systems is sending its latest MT30 gas turbine for service in a ship used by Japan’s version of the navy.

The 50th MT30 came off the Rolls-Royce production line in August. It will be sent to Kawasaki Heavy Industries in Japan. KHI will then dispatch and integrate it into the Japanese Maritime Self Defence Force’s 30FFM frigate sometime next year.

The ship should be in operation by 2022.

“Power density is the reason why marine gas turbines, started to displace steam turbines and boilers back in the 1960s and 1970s in warships,” Richard Partridge, chief engineer naval systems for Rolls-Royce, said in a statement. “Power density is characterized by high power from a very small package and this is epitomized in the MT30 package.”

The 50th MT30 came off the Rolls-Royce build line in August this year in preparation for despatch to KHI in Japan. This will be the second MT30 that Japan has received. Sam Cameron, Rolls-Royce Defence Senior Vice President for the Pacific Rim said:
“Japan has traditionally been one of the principal users of Rolls-Royce marine products, particularly gas turbines, so they are a very important customer and delivering the 50th MT30 is a very important milestone,” Sam Cameron, Roll-Royce Defence senior vice president for the Pacific Rim, said. “We look forward to continuing to grow the footprint of the MT30 in the region.”
KHI will build and assemble the MT30 into what is referred to as the “compact package engine enclosure.” Once installed KHI will conduct an integrated shore trial of the 30FFM propulsion system in their facility prior to delivery of the MT30 gas turbine to the shipyard in Japan next year.

The MT30 entered into service in 2008. It has much in common with the design and operations of the Rolls-Royce Trent 800 engine, which is used for the Boeing 777.