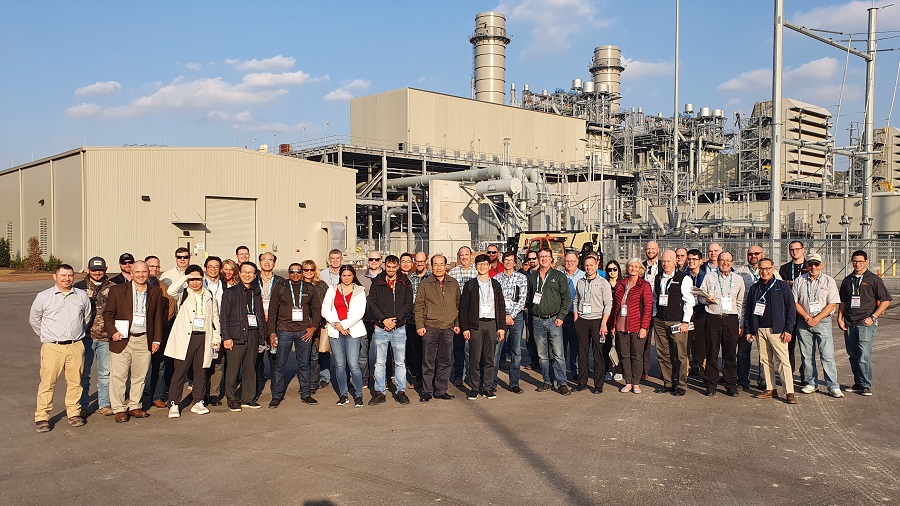 MONTZ, Louisiana­-Many of the workers who’ve been on the job at Entergy Corp.’s new St. Charles Power Station feel like they’ve gained nearly a decade’s worth of experience in only a few years.

In leading a group of POWERGEN International attendees on a tour of the combined cycle gas turbine power plant Monday, these employees talked about watching the project built from the ground up. At the same time, they remember training constantly on OEM equipment and gas turbine technologies even as the site was taking shape.

They know just about where every pipe is buried because they watched it go in over the three years from construction start to beginning of commercial operations this past May.

“You learn a lot in a short time,” T.J. Trahan, safety specialist at St. Charles, said. “You’re seeing so much, starting up and shutting down almost every day (during the testing phases).”

Entergy employs a total crew of about 31 people at the plant full-time now. The 980-MW St. Charles Power Station is the first of three similar power plants Entergy is building, including one in Montgomery County, Texas, and another in Lake Charles, Louisiana.

Plant manager Aaron Hill detailed the history of the St. Charles project, from initial discussions in 2014 to start of construction two years later. Entergy estimates that more efficient and cleaner burning CCGT technologies will save its customers $1.3 billion over the 30-year lifespan of the project.

Of course, many such plants are kept working much longer than that. St. Charles is built for the long run with two Mitsubishi Hitachi Power Systems 501-GAC gas turbines, two Nooter Eriksen heat recovery steam generators (HRSG) and a Toshiba steam generator.

Other equipment comes from suppliers and contractors  such as ABB, FlowServe, WEG and TECO. McDermott was the overall contractor on the construction phase of the plant.

This is the Gulf Coast, so the St. Charles plant also was built up seven feet over the surrounding elevation due to the high water table in the subsoil. Contractors used about 1,400 augur cast piles in elevating the plant.

The first generation of St. Charles employees also got an elevated education right from the beginning.

“All the training you could cram into two years­-we did,” control room lead Stew Messer pointed out. “For the first two years we went over every piece of equipment.”

“It was a great opportunity to be involved from day one,” Messer added.

The POWERGEN attendees came from all over to gain those insights and history into a unique power plant. The tour participants came from South Korea, Canada, the U.S. and the Caribbean.