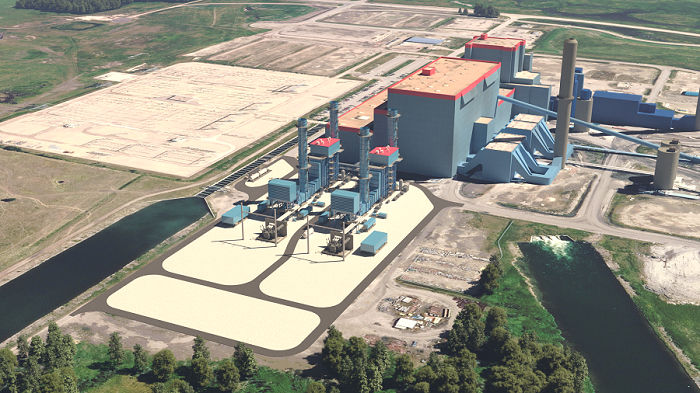 Capital Power will use the two M501JAC gas turbines in its Genesee units 1 and 2 (see rendering) as it converts from coal-fired generation. The repowered plant will provide 1,360 MW of electricity capacity by decreasing carbon emissions by about 60 percent.

“Capital Power is following a strategy toward a low-carbon future with a target to be net carbon neutral before 2050,” said Brian Vaasjo, President and CEO of Capital Power. “The repowering of Genesee Units 1 and 2 with Mitsubishi Power technology will position the Genesee station to be off-coal in 2023, delivering 3.4 megatonnes of annual carbon emission reductions, and will position it for additional carbon emission reductions in the future.”

The repowering project timeline calls for the units to operate in natural gas simple cycle mode during construction, allowing the Genesee station to be off-coal in 2023, with expected repowering completion of Unit 1 in 2023 and Unit 2 in 2024. The project is expected to employ up to 500 workers during peak construction phases.

The M501JAC gas turbines’ flexibility and 64-percent efficiency rating will enable Capital Power to balance even more intermittent renewable energy resources in Alberta. Capital Power is adding roughly 260 MW of solar and wind energy with delivery between now and 2022.

“Mitsubishi Power is pleased to support Capital Power’s repowering project to convert from coal to natural gas, and eventually to hydrogen with zero carbon emissions,” Paul Browning, President & CEO of Mitsubishi Power Americas, said. The station will become a model for reliability, availability, efficiency and sustainability.”