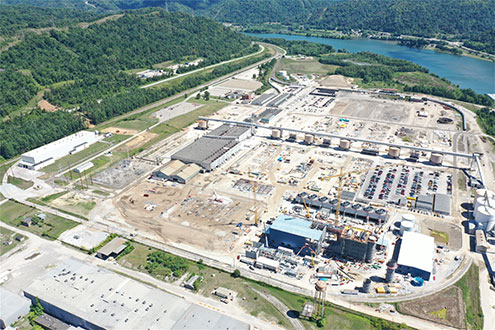 In one of the most striking signs that the hydrogen-powered generation revolution may be upon the industry sooner than later, a group will transition its combined cycle gas turbine power plant to run partially on hydrogen by a late 2021 start-up and go 100 percent H2 by 2030.

The Long Ridge Energy Terminal (pictured) in Hannibal, Ohio is now set to burn a percentage of carbon-free hydrogen in the power plant when commercial operations begin as expected in November 2021. The 485-MW facility was long planned as a pure CCGT facility.

A group including plant operators, New Fortress Energy and General Electric, however, opted to shift to hydrogen over the long term. The GE 7HA.02 combustion turbine reportedly can burn up to 20 percent hydrogen initially, with the capacity to transition completely over the next decade.

“We are thrilled to work with the Long Ridge and New Fortress Energy teams on this first-of-its kind GE HA-powered project that will drive a cleaner energy future by utilizing hydrogen to ultimately produce carbon-free power,” said Scott Strazik, CEO of GE Gas Power. “As one of the leaders in decarbonization in the gas turbine industry and the OEM with the most fleet experience in using alternative low heating value fuels including hydrogen, we look forward to applying more than 80 years of experience to help Long Ridge achieve its goal of providing reliable, affordable, and lower-carbon power to its customers.”

Hydrogen will be part of POWERGEN+ online in November

Long Ridge has engaged Black & Veatch to assist with developing plans for the plant integration for hydrogen blending and to ensure safe and reliable industrial practices.

For the production of green hydrogen with electrolysis, Long Ridge has access to water from the Ohio River. Over time, below ground salt formations can be used for large-scale hydrogen storage.

“Our singular focus has been to identify and support clean technologies that can eventually produce hydrogen at commercially attractive prices,” Wes Edens, CEO and Chairman of New Fortress Energy, said in a statement. “As we continue to make progress in our efforts and advance proof of concept projects, this experience will bring tremendous value.”

Initial planning for the gas-fired Long Ridge Energy Terminal dates back about five years. The power plant is being built on a former aluminum plant site, with rail and LNG loading facilities included in the planning.

(Rod Walton is content director for Power Engineering, POWERGEN International and the virtual POWERGEN+ series. He can be reached at 918-831-9177 and rod.walton@clarionevents.com).