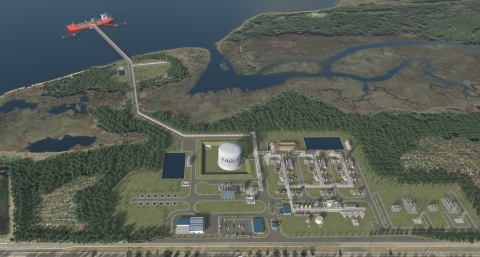 A liquidified natural gas company focused on exporting U.S.  LNG for power generation has received federal approval to site and construct its planned export facility in the Jacksonville, Florida area.

The Federal Energy Regulatory Commission authorized siting and construction for the Jacksonville LNG Export Facility by Houston-based Eagle LNG. Once completed, the facility could produce up to 1.65 million LNG gallons per day and contain 12 million LNG gallons of storage, plus marine- and truck-loading capacity on-site.

“The FERC authorization for Eagle LNG’s Jacksonville LNG Export facility has been many years and countless hours in the making,” Sean Lalani, president of Eagle LNG, said in a statement. “As one of only a handful of greenfield LNG project proponents to obtain their FERC Order, and the only project devoted to provisioning small-scale LNG projects in the Caribbean basin, Eagle LNG is one large step closer to delivering clean-burning, affordable, domestically produced U.S. natural gas.”

The company already is exporting small volumes of LNG from its Maxville facility. Eagle LNG’s business model is to export gas to the Caribbean and South America for power generation.

A recent report by IHS Markit indicated the dramatic impact of the U.S. shale gas drilling revolution on power generation goals not only domestically, but globally. Domestic demand has grown by more than 14 billion cubic feet per day, driven by the shift from coal-fired to gas-fired power plants, but American production is averaging closer to 90 billion daily cubic feet and shows no sign of abating.

Companies from the U.S. and around the world are working to build LNG export facilities along the Gulf Coast, then ship that to import terminals and re-gasification facilities. Nations such as Spain, Japan and Vietnam are making moves to import LNG.

The International Energy Agency has predicted that natural gas will overtake coal as the world’s second largest energy source by 2030.

Gas-fired power, LNG and its expert potential globally will be discussed in detail at POWERGEN International happening Nov. 19-21 in New Orleans. POWERGEN has a Gas-fired Turbines and Plants content track in its Summits upstairs, while the Natural Gas Knowledge Hub will be on the exhibition floor. Registration is open.