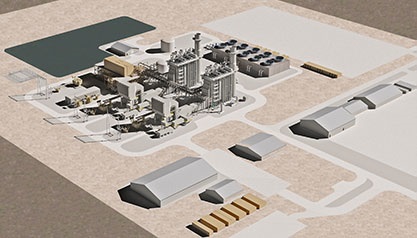 Phillip May, CEO of Entergy Louisiana, noted that Lakes Charles Power Station was completed well ahead of its previously scheduled June start of operations. The power plant is in Westlake, La.

“It’s a huge win for our customers,” May added. “Not only does the addition of this plant make our generation portfolio, which was already one of the cleanest in the nation, even cleaner, but it also supports system reliability and produces substantial customer savings.”

Combined-cycle gas turbine units like the Lake Charles Power Station emit on average about 40 percent less carbon dioxide than Entergy’s older natural gas-powered units, the company says. Because of the plant’s high efficiency, it has been projected customers will save between $1.3 billion and $2 billion over the anticipated 30-year life of the plant.

Lake Charles is one of three new CCGT plants that Entergy is having built in recent years. All of them ­- including Lake Charles, the recently completed St. Charles (renamed as the J. Wayne Leonard Power Station) and Montgomery County, Texas – all will be powered by MHPS turbines, with the Montgomery County being the last of the three under construction and the first new Entergy power plant in Texas for decades, according to reports.

Over the past 15 years, Entergy has added approximately 8,500 MW of combined-cycle gas turbine generation, allowing for the deactivation of over 6,500 MW of older, less efficient gas or oil units.