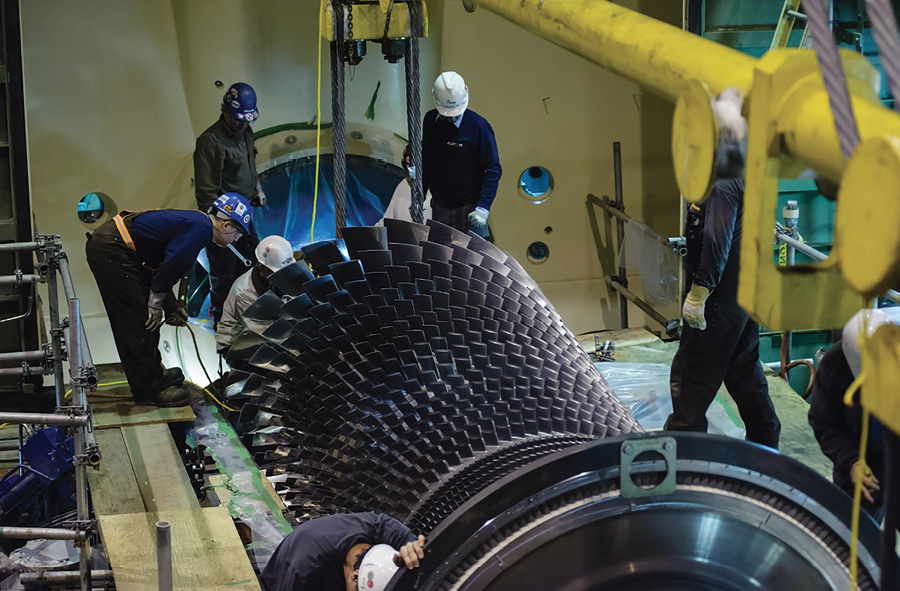 Thermal power plant protocols for upgrading turbine-generator units specify guidelines for controlling humidity when the unit’s internal components are exposed during maintenance. For this requirement, desiccant dehumidifiers and supporting equipment deliver the optimal return on investment over other options.

The first line of defense in guarding against moisture and corrosion begins with sealing off the work area to avoid ingress of ambient air into the dehumidified space. In addition to shutting off windows, manways and other entryways, openings such as compressor bleed valves are sealed to prevent air exchange between high humidity ambient air and dehumidified air. In some cases, such as with a recent turbine dehumidification project at a Mexican power plant on the Yucatan peninsula (where it rains almost every day during the summer), a temporary enclosure around the turbine and generator is designed to achieve the targeted humidity control. For these circumstances, additional man-hours and assembly time, along with de-assembly after re-commissioning needs to be planned into the project.

In addition to controlling relative humidity, an efficient moisture removal strategy is also included in any pre-outage planning process because exposure to impurities even at trace levels can damage rotors, stators and other components.

Internal unit components such as generator windings exposed to outside elements during maintenance are susceptible to moisture. Ferrous metals like iron and steel are well known for their corrosion in the presence of moisture. Microscopic and gross corrosion shorten their life and can idle the plant for additional repairs. Desiccant dehumidifiers that can operate off of portable generators can protect metallurgy from more subtle and expensive forms of corrosion. In addition to the turbine and generator, other idled equipment and sub-components within the power plant could also be subject to “standby corrosion,” which can often go undetected under high humidity and stagnant conditions.

During turbine operation, temperature control is also important considering that heat does not distribute evenly over potentially corroded metallurgy, such as what has been experienced with turbine blades. This can result in unsatisfactory vibration. So, the cost of avoiding this problem is justified considering the major damage and forced downtime that can result from prolonged vibration.

In many cases, targeted humidity levels depend on the client’s in-house maintenance policy. To resolve these challenges, a solution can be engineered for the facility with the exact air flow rates, temperature and humidity settings. In one dehumidification application involving motor cooling, Aggreko’s chiller/dehumidifier-based temperature control system provided a 30 degree temperature differential between outside ambient air and the treated dehumidified air.

This design was limited to one chiller to control costs and included a booster fan to enhance efficiency, resulting in only a one degree temperature loss along the 200 feet of insulated ductwork. As with other temperature control and humidity solutions, once engineers “spec-out” equipment needs, the length of ductwork, location and size of plenums and other factors influencing moisture-free air flow can then be designed into the proposal. 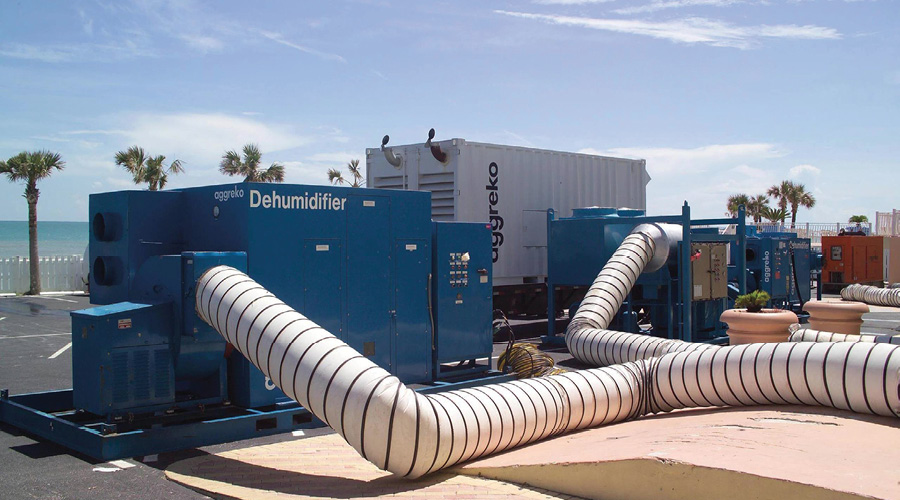 Fossil fuel power plants may include areas where moisture is retained much more tenaciously. For these instances, the superior dry environment created by a desiccant can significantly remove moisture, making it possible to greatly accelerate the overall drying and moisture removal process. Desiccants, from 3,000 to 10,000 CFM, can be operated off portable generators. Other powering options include propane, natural gas or steam heating.

Ducting that’s designed to create a “circuit” between the desiccant dehumidifying unit and the exposed turbine-generator requires precise engineering to optimize air flow and overall moisture removal efficiency. Obstacles such as sharp bends as seen when navigating around a maze of contractor equipment must be factored into the design. To maintain efficiency, it may be necessary to use insulated duct to ensure that any condensation that may occur inside the duct does not flow back into the desiccant. In addition, ductwork connected to exact-sized plenums deliver accurate flow rates at steady humidity and temperature settings.

In addition to a planned shutdown, unplanned maintenance or a shutdown due to low seasonal power demand may extend for months or even years. This is when primary and auxiliary plant equipment may be subject to extensive moisture damage. Considering these concerns, the industry paradigm is to maintain humidity levels at or below 40 percent to prevent corrosion. Above the 40 percent threshold, industrial pollutants like sulfur dioxide (SO2) accelerate corrosion rates. Corrosion is generated at an exponential rate when relative humidity exceeds 60 percent. So, if the relative humidity of the work space or area surrounding the generator or auxiliary equipment can be restricted to below 40 percent, then equipment can be maintained in a well-preserved condition for start-up.

Dehumidified air keeps components such as boilers, condensers, turbines, rust- free when the plant is shut down. In the case of fossil fuel power stations, layup can be due to furnace, boiler repair or less expensive power availability from an alternate source. During such periods, dry air circulation in the facility prevents rusting and other harmful moisture related problems. Expensive metal parts like rotors, compressor parts, bearings, buckets and blades and gearbox components corrode, while non metallic parts deteriorate.

Dehumidification technology can also prevent or reduce corrosion while the facility is operational and supplying electricity into the grid. For example, large volumes of air are required to operate a gas turbine. The power output and fuel consumption of a gas turbine generator are highly dependent upon the flow, temperature and quality of the air drawn into the combustion chamber. Relative humidity and contaminants carried with it influences air quality, which is why dehumidification systems, with filtration and an optional heating devices provide ice-protection, have been especially developed for harsh environments to maintain optimal airflows all year long.

These systems remove damaging contaminants from the air, improving output and extending the effective life of the turbine. The removal of weather hoods and the installation of inlet cooling and dehumidification will lead to substantial reduction in pressure drop through the turbine inlet.

Further efficiency gains can be achieved through the installation of evaporative cooling systems.

These systems incorporate evaporative cooling, from chillers to air handlers, to cool the incoming air stream. Cooler air has a higher density, boosting the output of the turbine. System-wide benefits include reduced filter changes, maintenance and downtime; extended operational life of the turbine; and increased power generation due to lower air temperature supply and reduced inlet pressure drop.

“Dehumidification technology can also prevent or reduce corrosion while the facility is operational and supplying electricity into
the grid.”

Many of the recent generator unit upgrades have primarily taken place onsite rather than offsite, including repair or rewinding of stators, rotors, excitors, etc. This is why onsite rewinding activities need to be kept moisture free. Without the need for more expensive nitrogen blanketing, desiccant dehumidifiers can achieve very low relative humidity levels within the enclosure housing the unit. Depending on the conditions predicating microscopic level corrosion, the addition of mechanical refrigeration can enhance desiccant performance. The advantages of each type of dehumidification system compensate for the limitations of the other.

A Texas power plant took a routine outage for maintenance on one of its turbines, where dehumidifiers were installed to blow dry air through both the turbine and generator windings. This costs less and is safer than nitrogen blanketing. For years, the standard practice was to blanket turbines with a continuous flow of nitrogen from external tanks or nitrogen generators. Nitrogen, inert and extremely dry, provides excellent protection. However, providing the volume of nitrogen required to blanket a large turbine for weeks on end is extremely expensive, and working around high concentrations of nitrogen requires safety precautions.

Another alternative, coating the turbine and components with corrosion inhibitors or grease, is less effective and requires additional days of downtime for coating and cleanup. Desiccant dryers that attract and remove moisture from a manufacturing space, are far more effective for corrosion prevention than either wet layup with corrosion inhibitors or preservation in grease. Precise positioning of dehumidification equipment close to the turbine and generator unit undergoing maintenance is important considering the tight space limits and hundreds of contractors working at the plant site during the planned shutdown, such as with this Texas facility.

Considering this challenge, one large desiccant dehumidifier can be used instead of many smaller dehumidifiers with practical setup advantages. The optimal solution for this project included a 2250 cfm and a 3000 cfm dehumidifier with custom-fit plenums for both units to attract and release moisture from high volumes of air surrounding the turbine, stators and windings, leaving exposed surfaces clean and dry while removing any residual moisture in the stators and windings.

Installation and speed of removal also factored into the project’s success. The availability of adequate and reliable temporary power was another concern that had to be overcome and was included in the proposal. The engineering proposal submitted to the client included custom-made elbows and plenums that fit the openings of the turbine inlet and outlet. Aggreko already had a master service agreement with the plant to provide temporary power and climate control support for multiple stages of plant maintenance, so portable equipment was readily available.

Going forward, as renewable power sources achieve grid parity with fossil fuel based power; there could be an increased need for dehumidification services as more fossil fuel plants are idled when less expensive power becomes available from alternate sources. A recent report from the investment banking firm of Morgan Stanley noted that numerous key markets have reached an inflection point where renewables will become the cheapest form of power generation by 2020, a dynamic they see spreading to nearly every country they cover. Case in point: a thermal generating plant in Brazil was idled for four years when hydroelectric power became more economical.

Until recently, 80 percent of Brazil’s electricity was generated by hydropower, but with reservoirs in Brazil emptying due to an unprecedented drought since 2014, this bespoke thermal plant was re-commissioned and operational in only seven weeks following the four -year outage. Plant availability is reported to be greater than 98% due to a well planned preservation program and close cooperation between the power producer, OEM and service suppliers. A key component of this program was the incorporation of desiccant dehumidifiers.

Similar scenarios are beginning to play out more frequently in North America as renewable-based power generation increases, compelling the idling of thermal generating plants on a more frequent basis, lasting months or even years. Against this backdrop, comprehensive system-wide preservation programs can include boilers (flue and water side), complete boiler houses, and piping and steam turbines that can be efficiently preserved by using dehumidification. In the case of stand-by or idled units, the flue side of the boiler can be protected, as well as the steam turbine. Additionally, all water can be drained away from the water side, and replaced with dry air.

Inevitably, having worked continuously with the central power generator plays a significant role in optimizing continuous high-volume dehumidification, whether for planned maintenance or within the scope of a prolonged preservation program. The repository of information obtained during the course of a master service agreement with the electric utility client for services like temporary power and climate control helps pinpoint the need for people, equipment and processes for impending dehumidification challenges.

Eric Bateman is the Utilities Sector Lead for the Southern and Central regions of North America at Aggreko, which is the world’s largest temporary power and distribution company.