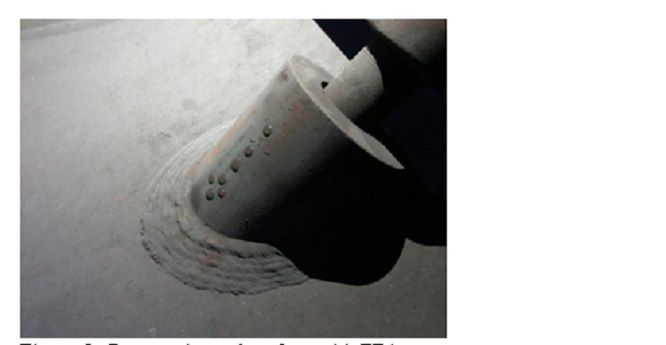 Many of the new combined cycle power plants that have sprouted up in the last two decades have open recirculating cooling systems, i.e., cooling towers, for turbine exhaust steam and auxiliary cooling.  Corrosion protection is critical for these systems, as well as for new plants, including those using hydrogen-fueled combustion.  A common perception amongst many personnel at power plants and other industrial facilities is that chemistry programs for cooling water systems, and other water/steam systems for that matter, are primarily designed to condition the bulk fluid.

While this idea is, in large measure, accurate for scale and microbiological control, protecting metal surfaces is key aspect for corrosion control.  This article summarizes the evolution in cooling water corrosion control, and it also briefly examines the continued emergence of film-forming chemistry for corrosion protection in steam generating systems.

Corrosion inhibitors function by slowing down reactions at either the anode, the cathode, or sometimes both on the metal surface.  A basic corrosion cell for mild steel in aerated water is shown below.

For years during the middle of the last century, chromate (CrO42-) was very popular for corrosion control in cooling systems, both open and closed.  While chromate is considered an anionic inhibitor, with sufficient dosage it will form a complete surface layer of iron chromate (pseudo-stainless steel), which can be quite protective.  Chromate programs were often coupled with acid feed to react with bicarbonate ions (HCO3–) and convert them to CO2 that escapes.  Alkalinity reduction greatly reduces the potential for calcium carbonate (CaCO3) scaling, which is typically the first mineral deposit that would otherwise precipitate without treatment. Chromate/acid chemistry is very straightforward and effective and would still be around if not for environmental issues relating to chromium discharge, particularly in relation to the toxicity of hexavalent chromium (Cr6+).  The elimination of chromate programs basically turned the cooling water industry on its head, and the popular replacement methods that emerged were radically different.

Treatment evolved to phosphate- and poly-phosphate-based chemistry for both scale and corrosion prevention.  The programs typically function at a mildly alkaline pH, which minimizes general corrosion.

Figure 2.  General influence of pH on the iron corrosion rate.

Beyond the pH aspect, this chemistry relied on deposition of reaction products on the metal surface to provide additional corrosion protection.  Phosphate will react with ferrous ions (Fe+2) produced at anodic sites to form a reaction-limiting deposit, while [Ca3(PO4)2] precipitates in the local alkaline environment at cathodic sites to inhibit electron transfer.  However, even small upsets in phosphate programs can cause severe calcium phosphate fouling, and at one time, excess Ca3(PO4)2 deposition became almost as great a problem as calcium carbonate scaling. Accordingly, treatment methods evolved to more forgiving methodologies; in many cases, the backbone of these programs are organic phosphates (phosphonates) with a supplemental polymer to control calcium phosphate deposition.  Phosphonates attach to deposits as they are forming and disrupt crystal growth and lattice strength.  Another common additive was zinc, at approximately 0.5 to 2.5 mg/L concentration.  Zinc reacts with the hydroxyl ions generated at cathodes to form a precipitate [Zn(OH)2], which provides additional cathodic protection.  A key concept of these schemes was utilizing reaction products to help protect metal surfaces from corrosion, but whose effectiveness was often questionable.

In addition, for the many systems that had, or still have, heat exchangers with copper alloy tubes, supplemental azole chemistry was, and still is, common to protect these metals.  This article does not explore azole chemistry in depth, but in brief, azoles are organic compounds (a benzene ring at the core) with nitrogen functional groups.

Figure 3.  Benzotriazole, the simplest of the azole compounds.

The nitrogen groups attach to copper, with the plate-like organic rings forming a mono-molecular layer on the metal surface to protect it from the environment.  A variety of azoles, containing various side groups, have been developed to improve bonding properties and increase azole resistance to degradation by other chemicals such as oxidizing biocides.

As might be surmised from the discussion above, phosphate/phosphonate chemistry can be quite complex, and if conditions are not precisely controlled, excess deposition or corrosion may occur.  Also, concerns continue to increase regarding phosphorus discharge to the environment, and its influence on toxic algae formations in receiving bodies of water.  In many locations around the country, regulations are in place that limit point source phosphorus discharges, including cooling tower blowdown.

Accordingly, a significant evolution in cooling water chemistry treatment is underway.  A number of excellent polymer formulations have been developed for scale inhibition, but what about corrosion control?  Much progress has been made.  Particularly effective is a chemical formulation with the trade name of FlexPro®, which was introduced a decade ago and is best described generically as a reactive polyhydroxy starch inhibitor (RPSI).  This compound, by virtue of many active sites on the molecules, is specifically designed to attach to metal surfaces and form a protective layer.

Figure 4.  General schematic of how these compounds work.  Active sites attach to the metal surface, and the organic substrate extends outwards, providing the barrier.

Unlike the previous phosphate/phosphonate programs, this chemistry does not rely on precipitation of reaction products to coat the metal surface but provides direct protection.

FlexPro® chemistry is now employed at well over a thousand locations, with results from two examples as follows.

In the first case, at a large industrial complex in the southeastern U.S., RPSI replaced previous polyphosphate and then zinc chemistry.  Carbon steel corrosion rates have been reduced from 0.2–0.25 mm/year to 0.0025–0.0075 mm/year.  On a secondary note, the change from zinc and then to RPSI was in some measure influenced by problems with severe algae formation in a clarifier and recycle pond at the plant.  The removal of phosphate from the water solved that difficulty.

In the second example, the chemistry has been applied to both non-contact cooling and direct spray cooling at a steel mill in the southern US. [1]  Besides greatly reduced corrosion rates for three plant cooling systems, results included:

Many other examples could be included, but the key point is that this chemistry directly protects metal surfaces.

The idea of utilizing film-forming chemistry for steam generators is not new, as film-forming amines (FFA) were introduced decades ago, with a common compound being octadecylamine (C18H39N).  The amine group on each molecule attaches to the metal substrate, and the long-chain organic compound extends into the water and acts as a barrier.  However poor control and lack of detailed knowledge of the overall chemistry often led to problems, including formation of “gunk balls” in the common vernacular, which fouled steam generators.

Fast forward to today.  Advancements in chemical synthesis techniques and analytical instrumentation have led to the development of new film-forming substances that are much more effective at protecting metal surfaces.  Consider the effect of this chemistry on carbon steel, which is the common metal for feedwater systems, boiler tubes, and many other steam generator components.  When carbon steel is first exposed to water in a steam generator, the surface forms a layer of grayish-black magnetite (Fe3O4) via a several-step process.   This iron oxide “topotactic” layer then becomes overlaid by a looser, epitactic layer composed of iron oxide deposition products.  Ions can move in and out of these layers, and in fact it is the movement of ferrous ions (Fe2+) out of the metal substrate at flow disturbances that leads to flow-accelerated corrosion (FAC), a mechanism that continues to plague many plants. [2]

These products penetrate the epitactic layer and form a significantly strong bond with the topotactic layer and metal substrate underneath.  Figure 5 shows a protected metal surface (during off-line conditions), and how the water beads rather than wetting the surface.

A real benefit of this chemistry is the protection it can provide during unit outages.  The power industry has dramatically changed over the last two decades from mostly base-loaded operation to one in which most units cycle up and down, or even on and off, in load regularly.  Film-forming products, when correctly applied, can be quite protective of metal surfaces during unit downtimes.  In a recent application at a combined cycle plant in the Northeast, the product brought feedwater concentrations down to a low part-per-billion (ppb) level, where they remained during frequent load swings.

However, it must be noted that implementation of these programs, as with any others, cannot be performed willy-nilly.  Well known are examples where a less-than-knowledgeable vendor suggested that such chemicals could be injected into the unit, and all corrosion issues would magically disappear.  A careful analysis of system operation and past/present chemistry is necessary beforehand.  pH is a strong influence on this chemistry, which must be diligently monitored and controlled to maintain proper FFA performance.  Also, when some of these chemicals are first applied, they tend to break loose a large portion of epitactic layer shown in Figure 5.  These particulates need to be removed by boiler blowdown to prevent fouling in other locations.  A chemical cleaning of the unit may be required if heavy iron deposits are already present.

An aspect of this chemistry that is still being improved is accurate monitoring techniques of chemical residuals to ensure the proper free concentration remains in the system at all times.  This chemistry shows strong potential for application at many industries outside of traditional power plants, including co-generation facilities, university campuses, hospitals, and other plants that have extensive steam and condensate return systems.

Disclaimer: Results are examples only. They are not guaranteed. Actual results may vary.

About the authors: Brad Buecker is senior technical publicist with ChemTreat.  He has 35 years of experience in or affiliated with the power industry, much of it in steam generation chemistry, water treatment, air quality control, and results engineering positions with City Water, Light & Power (Springfield, Illinois) and Kansas City Power & Light Company’s La Cygne, Kansas station.  He also spent two years as acting water/wastewater supervisor at a chemical plant. Buecker has a B.S. in chemistry from Iowa State University with additional course work in fluid mechanics, energy and materials balances and advanced inorganic chemistry. He is a member of the American Chemical Society, American Institute of Chemical Engineers, American Society of Mechanical Engineers, Association of Iron and Steel Technology, Cooling Technology Institute (via corporate membership), National Association of Corrosion Engineers, the Electric Utility Chemistry Workshop planning committee, the EPRI-sponsored Power Plant & Environmental Chemistry Committee, and the Power-Gen International planning committee.

Raymond M. Post received a Bachelor’s degree in chemical engineering from Princeton University in 1976 and has 41 years of experience in industrial water treatment.  He holds 2 patents and has authored more than 50 technical publications in this field.  Mr. Post is a licensed professional engineer and a member of the Cooling Technology Institute, International Water Conference Advisory Council, National Association of Corrosion Engineers, American Society of Mechanical Engineers, and the National Society of Professional Engineers.  He was formerly the Director of Cooling Water Technology at ChemTreat, Inc., and is now retired.

Rajendra P. Kalakodimi received a Master’s degree in physical chemistry at Andhra University and a Ph.D. in Electrochemistry at the Indian Institute of Science in Bangalore in 2003. While in India he served as the Engineering Technical Leader at the GE India Technology Centre in Bangalore and as Product Manager for Chemicals and Monitoring Solutions for GE Water. He has over 20 patent filing, 20 international publications and various conference presentations. Dr. Kalakodimi is currently the Director of Cooling Water Technology at ChemTreat, Inc. in Ashland, VA.

Dale Stuart is Technical Services Consultant with ChemTreat. He has worked at ChemTreat for over 20 years doing research in automation, internal boiler treatments, hazardous chemical removal, and scale control. Stuart has a M.S. and B.S. in Chemistry from Virginia Commonwealth University and a B.A. in Biology from the University of North Carolina at Charlotte. His graduate work focused on advanced inorganic chemistry, nanoparticle synthesis, and enhanced heat transfer with iron oxide nanoparticles. He is a member of ACS and NACE. He may be reached at dalest@chemtreat.com.