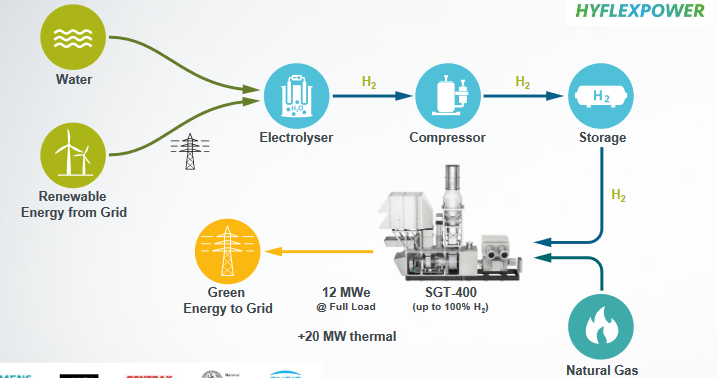 Hydrogen is no secret or surprise to the industrial production world. It’s been a feedstock for years, produced by steam reforming of natural gas, a process that emits more carbon dioxide in an already warming atmosphere.

Producing and employing hydrogen in a cleaner, more efficient way, however, can revolutionize the power generation world and offer carbon-free options in steelmaking and other industries. A trio of Siemens experts offered insights into both carbon-free hydrogen’s potential and the company’s own efforts in a Wednesday webinar.

Fossil energy currently accounts for nearly 70 percent of the world’s energy emissions. Limiting global warming and the effects of climate change has been helped by a move to renewable energies and from coal-fired power to natural gas, but it needs more.

“What’s so special about hydrogen? First of all, hydrogen is an energy carrier,” said Nakul Prasad, corporate strategy manager for Siemens Energy, which includes the German-based company’s gas turbine and renewable generator businesses. “Producing hydrogen by electrolysis, for instance, can help time-shifting energy short and long-term as well as balancing intermittent renewables as a storage mechanism.”

Electrolysis, which separates the hydrogen and oxygen components from water, is a complex and energy-intensive process. The movement to so-called “green hydrogen” focuses on energizing electrolysis plants with renewables such as wind and/or solar.

Prasad was joined in the Siemens webinar by Natalia Westhaeuser, senior vice president and head of business development and sales of New Energy Business at Siemens Energy, and Jenny Larfeldt, who is senior gas turbine combustor expert for the company and has spent the last 10 years studying the use of hydrogen in gas-fired power generation. Much of their presentation focused on hydrogen power projects Siemens is undertaking in numerous countries with industrial, state and university partners.

Those projects include work on hydrogen-rich gas power at a cogeneration plant in Brazil, working with petrochemical firm Braskem.

Siemens is also participating in an upcoming Swedish research effort focused on steadily increasing the hydrogen percentage in the fuel mix up to 100 percent by 2030.

The road is slow and deliberate and full of safety and mechanical considerations, Larfeldt noted.

“Already 10 years ago, we mapped the capability of the standard burner” reaction to adding hydrogen in the gas turbine, Larfeldt said. “In 2012 we tested a single burner.”

Encouraged by good results, Siemens’ testing reached 60 percent by volume in the burner feed two years later. By 2017, it was testing the company’s SGT-800 gas turbine with hydrogen mixes of 30 and 50 percent, while keeping nitrogen oxide emissions to 15 and 25 parts per million, respectively.

Retrofitting gas turbines to burn hydrogen, which moves the flame closer to the injector, involves numerous equipment and safety adaptations. The burner, fire protection system, instrumentation and piping must be designed for hydrogen operation.

This type of complexity and change is why Siemens spends more than 10 years working on incremental advancements. Taking it out into the world is not the road to go it alone, she pointed out.

“This is a challenge  for us,” Larfeldt said. “That’s the reason why we’re looking for collaboration with customers.”

The potential of a carbon-free gas-fired capacity is already driving joint ventures and investment worldwide. The U.S. Energy Policy Simulator quoted by Forbes in an article last year forecast that hydrogen could generate $150 billion in revenue per year by 2050, while also lowering greenhouse gas emissions by up to 120 million metric tons annually.

“Across all sectors we are focused on decarbonization approaches for energy,” Prasad said. “We have to look at the overall bigger picture for climate change and global warming.”

Other power equipment manufacturers such as GE, Mitsubishi and Ansaldo also are making moves into the hydrogen sector.