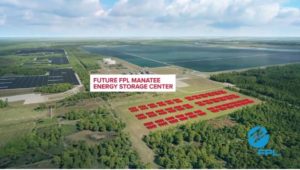 The utility says FPL Manatee Energy Storage Center will be the biggest solar power-battery storage facility in the world when operational. The Parrish, Fla., center will have 400 MW of output and 900MWh of capacity, enough to power about 329,000 homes for more than two hours, according to the release.

It is expected to be completed later this year. Irby was awarded the contstruction contract on the project.

“Energy storage is an essential piece of the puzzle when it comes to building on our rapid solar expansion and delivering a brighter, more sustainable energy future that all of us can depend on, including the next generation,” FPL CEO Eric Silagy said. “But the Manatee Energy Storage Center isn’t just bringing the Sunshine State one step closer to around-the-clock solar power, it is also helping turn Florida into a world leader in clean energy and sustainability.”

The newly installed storage container is the first of 132 units that will ultimately be installed onsite. Each unit weighs approximately 38 tons, is roughly 36 feet long by 11 feet in height and width and will hold roughly 400 battery modules, with each battery module being equivalent to about 2,000 iPhone batteries.

The battery modules will store the extra solar energy produced by the neighboring FPL Manatee Solar Energy Center when the sun’s rays are strongest and send it to the grid when there is a higher demand for electricity.

By the end of the decade, FPL forecasts that nearly 40% of the company’s power will be generated by zero-emissions energy sources—a 65%-plud increase from 2020.

Energy Storage will be the focus of the December POWERGEN+ online series. Contact us if you have a session idea