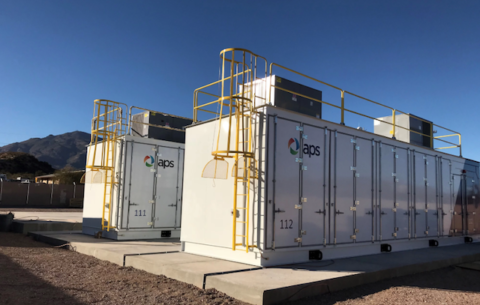 Utility Arizona Public Service (APS) has completed a far-ranging investigation into what has been considered as one of the most significant battery storage fires in US history which injured four firemen in Surprise, Arizona, on the night of Friday, 17 April 2019.

The report, prepared in partnership with utility and energy giant DNV GL, after an investigation by APS, the manufacturers involved, and third-party engineering and safety experts, has been filed with regulators the Arizona Corporation Commission.

The fire was caused when a rack of lithium-ion batteries supplied by LG Chem, and operated by storage company Fluence, heated up and caught fire. The fire suppressant deployed to douse the fire proved ineffective, leading to a build-up of explosive gases that ignited when firefighters opened a door, resulting mending several to hospital.

“Conversations and learnings around an event like this are [critical] because that’s how you get the information out that needs to be considered in the next generation,” said Scott Bordenkircher, director of technology integration and innovation at APS said in an interview.

The conclusions reached in the investigation are as follows:

• The suspected fire was actually an extensive cascading thermal runaway event, initiated by an internal cell failure within one battery cell in the BESS: cell pair 7, module 2, rack 15 (battery 7-2).

• It is believed to a reasonable degree of scientific certainty that this internal failure was caused by an internal cell defect, specifically abnormal Lithium metal deposition and dendritic growth within the cell.

• The total flooding clean agent fire suppression system installed in the BESS operated early in the incident and in accordance with its design. However, clean agent fire suppression systems are designed to extinguish incipient fires in ordinary combustibles. Such systems are not capable of preventing or stopping cascading thermal runaway in a BESS.

• As a result, thermal runaway cascaded and propagated from cell 7-2 through every cell and module in Rack 15, via heat transfer. This propagation was facilitated by the absence of adequate thermal barrier protections between battery cells, which may have stopped or slowed the propagation of thermal runaway.

• The uncontrolled cascading of thermal runaway from cell-to-cell and then module-to-module in Rack 15 led to the production of a large quantity of flammable gases within the BESS. Analysis and modeling from experts in this investigation confirmed that these gases were sufficient to create a flammable atmosphere within the BESS container.

• Approximately three hours after thermal runaway began, the BESS door was opened by firefighters, agitating the remaining flammable gases, and allowing the gases to make contact with a heat source or spark.

There were five main contributing factors that led to the explosion:

• Contributing Factor #4: Flammable off-gases concentrated without a means to ventilate

• Contributing Factor #5: Emergency response plan did not have an extinguishing, ventilation, and entry procedure This report concludes that today’s standards better address hazard assessment and training for first responders, although the industry expectation should go even further and require that hazard assessments and training take place before and during the commissioning of energy storage systems.

The report reads: “In today’s practice, the systems integrator and EPC contractor typically coordinate safety response plans on behalf of the owner, and then train the operations and maintenance (O&M) personnel to execute them. While today’s energy storage safety codes and standards acknowledge cascading thermal runaway as a risk, they stop short of prohibiting it, and fail to address the risk of non-flaming heat transfer to neighbouring cells, modules, and racks.

Standards today focus on the means to manage a fire, but have so far avoided prescribing solutions that restrict or slow cell-to-cell and module-to-module thermal runaway propagation (likely due to a reticence to prescribe anything that may be perceived as prohibitively expensive or non-commercial).