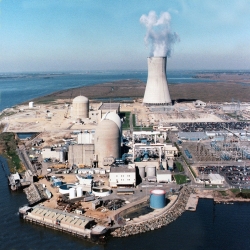 Editor’s Note: Nuclear energy in the U.S. is the single largest resource of carbon-free power, accounting for 55 percent of that sector which includes utility -scale wind, hydro and solar.

Nuclear, however, is the most expensive generation type to both build and maintain, and, of course, comes with the gravest safety concerns of radioactive materials. These are some of the reasons why only one new reactor unit, TVA’s Watts Bar 2, has been added in the past three decades. And only two new reactors, Units 3 and 4 at Georgia Power’s Vogtle power plant, are under construction in this country.

This is not to say that nuclear will become irrelevant in the future. It still accounts for close to 20 percent of the U.S. generation portfolio, as well as 17 percent in Canada (nearly two-thirds in the Ontario province alone).

The events at Fukushima in Japan almost exactly 10 years ago, no doubt, have accelerated the fears of nuclear meltdown in the developed world. Europe and the U.S. have long histories with the generation resource, but also are retiring many of those plants are they embrace wind and solar as the newly installed clean energy types.

In Asia, full of developing economies desperately seeking baseload and carbon-free power to bring electricity to all of their citizens, nuclear is on the way up. Turkey, China, the United Arab Emirates and Bangladesh are all building or commissioning major reactor projects.

Nuclear Energy Institute President and CEO Maria Korsnick recently delivered hopeful remarks to the group’s membership, touching on the potential for carbon-free nuclear capacity as the Biden Administration pursues even stronger emissions reduction goals from both the transportation and power generation sectors.

Some of her comments are included below. Korsnick was keynoting the NEI’s State of the Nuclear Energy Industry event on Tuesday, a centerpiece of Nuclear Innovation Week.

“Optimism can be in short supply these days. When we talk about the future, we mostly hear about threats. We hear about the threat of lost jobs if we can’t rebuild our economy after the Covid-19 pandemic.

“There is no bigger opportunity in front of us than rebuilding the world’s energy system around carbon-free sources. Over the last year, the conversation around the climate crisis has changed dramatically. “There’s no more debate about the need for swift action. When we gathered last year, there was already a widespread consensus around the need to decarbonize while meeting the world’s growing demand for electricity. To avoid the worst effects of climate change, we would have to bring carbon emissions from electricity generation close to zero by 2050.

“Since then, utilities, state governments, and the new Biden administration have made concrete commitments for getting there even sooner, by 2035.

“Fortunately, as we strive to meet those commitments, the U.S. leads the world in producing a proven, carbon-free, scalable source of electricity, that enjoys bipartisan support.

“That source is nuclear energy. And there’s no more serious debate:  it’s the key to making our climate commitments work. NEI members know this and are among those leading the way. In fact, more than 75 percent of the 2050 carbon-reduction commitments made by utilities have been made by NEI members…

“The value of nuclear energy’s reliability has become even more apparent over the past year. During a slow-burning crisis like the pandemic, or a sudden one like the devastating winter storms across the southern U.S., nuclear plants have powered through unprecedented conditions.

“In 2020, nuclear energy became the second-largest source of electricity in the United States overall. Our 55 power plants produced nearly 800 million MWh–surpassing coal for the first time ever.

“And we are doing more with less. In 1989, it would have taken 33 additional reactors to generate the same amount of electricity that we generated in 2020. We’ve done this by operating at more than 90 percent of capacity–a measure we call capacity factor–for the last 22 years. And we’ve done it all while making nuclear energy even more affordable.

“In terms of reliability, efficiency, and affordability, that is simply remarkable. Our ambitious climate commitments demand a reimagined energy system with our largest, most reliable, carbon-free source, at its center.

“Governments, NGOs, and the private sector all agree:  ambitious climate plans only work with nuclear energy. The only question is whether we’re serious about making them work.

“We must be unequivocal about that reality. And we must act immediately.”

Click here to see the full transcript of Korsnick’s speech to the NEI membership.

Nuclear energy is part of the decarbonization future in the power generation mix. Decarbonization, the Future of Electricity, the New Energy Mix and Trends in Conventional Power are all content tracks planned for POWERGEN International happening January 26-28, 2022, in Dallas. The POWERGEN Call for Speakers is now open and seeking session ideas on nuclear and all other links in the generation chain. Click here for more information and to submit an abstract.