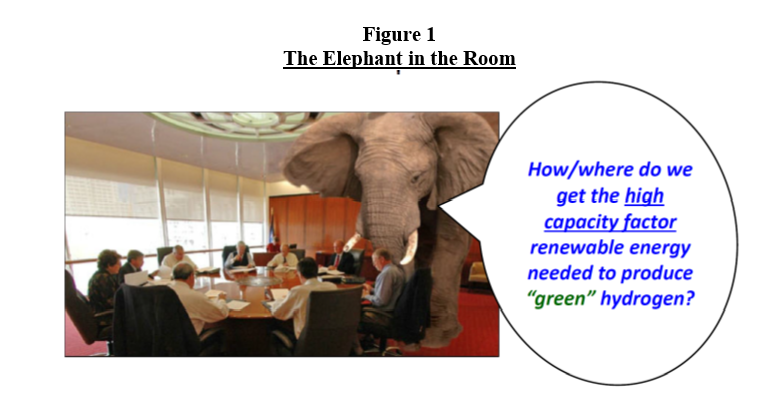 By Robert Schulte and Fredric Fletcher

There is currently a lot of electric utility industry excitement about the prospect of using “green” hydrogen for power generation.  “Green” meaning the hydrogen will be produced from renewable electrical energy using technology called electrolyzers, without causing carbon emissions associated with climate change.

Hydrogen electrolyzers use electricity to produce hydrogen from water. The resulting green hydrogen could then be stored for use later in fuel cells or gas turbines to regenerate electricity.  The excitement goes so far as to tout that “surplus” renewables could be used — renewables that would otherwise be wasted.

Technology research sponsored by the U.S. Department of Energy (DOE) and others seeks to resolve the current technical challenges of producing and using green hydrogen.  For the most part, these challenges include safety, improving electrolyzer performance, transporting and storing hydrogen and, the core challenge: reducing the cost of producing green hydrogen from the current $5 to $6 (US) per kilogram (kg) to $1 to $2 per kg.

Once the green hydrogen is produced, additional challenges await in combusting it for use in utility turbines. This includes issues like control of nitrous oxides (NOx) emissions, and the fact that combusted hydrogen is corrosive to the materials currently used to make turbine blades.

For purposes of this article, we assume all these technical challenges will be resolved.  But there is still a proverbial elephant in the room.  An elephant no one seems to be talking about (Figure 1 at top).  The drive to reduce the cost of green hydrogen production is quietly assuming the electrolyzers would be operating at relatively high annual load factors.  And reliance on only renewables local to the electrolyzer, or its local utility, or even the local wholesale market, will not support such high load factors.  They lack constancy and, importantly, time diversity.

Consider for example the green hydrogen project underway at the Intermountain Power Project (IPP) site near Delta, Utah.  There, an existing 1,800-MW coal plant serves baseload power to municipal utilities in Utah and Southern California.  The Southern California municipals have elected to retire the plant in 2025, two years earlier than previously planned.  The plant would still exist, but its California customers will go away.

Led by Los Angeles Department of Water and Power (LADWP), an 845-MW natural gas-fired combined-cycle gas turbine (CCGT) plant will serve as an alternative to the retired coal plant for the Southern California municipals.  While natural gas has lower carbon emissions than coal, it still has significant carbon emissions.  To reduce carbon emissions further, it has been proposed that the CCGT will initially be fired with a mix of 30% green hydrogen and 70% natural gas, increasing to 100% hydrogen over time as the current technical and cost challenges related to hydrogen are resolved.

Hydrogen electrolyzers are capital-intensive.  To reach their intended cost goals per unit of output, they need to run at high load factors–that is, to spread their significant capital costs over a lot of energy output.  Imagine the cost curve of green hydrogen production as a function of the capacity factor of available renewable energy fuel (Figure 2).  The higher the availability of the renewable electricity to run the electrolyzer, the lower the per-unit cost of green hydrogen output.

Conceptually, solar energy from Southern California could be used.  But solar resources there have an annual capacity factor of about 25% — regardless of whether it is produced on a distributed rooftop or from a utility-scale solar farm, because such solar resources lack time diversity between one another.  Either they are all on, or all off, depending on the sun’s diurnal cycle. Using California solar alone does not look good on the electrolyzer cost curve (Figure 2).  The elephant is speaking loudly to us here.

Utilities, corporations, and electrolyzer companies cannot achieve high levels of renewable energy using only their local renewable sources alone. Instead, they need to access time-diversified renewables from other regions as well.  This is an option that utilities have not adequately explored to-date.  But they need to.

Consider a large electrolyzer located at the IPP site fired only with a similar amount of MW of Southern California solar energy.  Figure 3 depicts such a setup for a typical week.  The electrolyzer power supply peaks and falls with the sun.  And is only available, on average, about 25% of the time.

What if we added local solar supplies in Utah?  Reportedly there is a lot of new solar capacity waiting in the transmission interconnection queue at Delta.  Figure 4 shows the results.  Sadly, there is little or no time diversity (but maybe a bit of cloud cover diversity) between Southern California solar and Utah solar.  They are not that far apart in longitude.  The sun arrives at and departs from them at about the same times.  So that does not help much.

What if we thought more expansively?  What if we brought Wyoming wind from afar into IPP?  Several projects have proposed to do that using high voltage, direct current (HVDC) transmission. Figure 5 (below) depicts how that would appear in the same week at Delta.  Now things look a lot better.  In this example, three of the nights in the week now have renewables supply, to go with the daytime solar.

So far, so good.  What if we added South Dakota (or Nebraska), Iowa, and Illinois wind to the picture (Figure 6 below)?  This results in a relatively constant renewable energy supply on an hourly basis.  This is for just one example week.  Randomly pick any week you want; the picture is similar.  Time diversity matters.  Your local renewables may operate often.  But time-diversified renewables are nearly always available somewhere if you can access them.

How do we practically achieve time-diversified renewable energy to make green hydrogen?  Or for that matter, for anyone to achieve their goals of high levels of renewables?  The answer is interregional HVDC transmission.

Power from the Prairie LLC (www.powerfromtheprairie.com) has developed such a project.  Power from the Prairie is a proposed, 4000 MW, HVDC transmission line extending from the wind fields of Wyoming, crossing either South Dakota or Nebraska to the wind fields of Northwest Iowa (Figure 8 at bottom).  It would have a DC/AC/DC converter station in the middle to enable interconnection of thousands of MW of new wind projects in some of the best wind resources in the nation, currently landlocked by lack of transmission and access to markets.

The project could also include large, long duration grid-level energy storage like the proposed Gregory County pumped hydro project in South Dakota (1200 to 1800 MW, 24 to 36 hours of storage), if found to be incrementally cost-beneficial in addition to the line. Or vice versa.

Combined with existing and proposed wind-to-load HVDC transmission projects, Power from the Prairie would enable bi-directional swaps of time-diversified renewable energy from Los Angeles to Chicago and Eastward.  By enabling bi-directional swaps, the economics of such transmission lines are dramatically improved from the wind-to-load business model.

In addition to supporting production of green hydrogen, such developments could also be used to enable the State of California to achieve its planned high levels of Renewable Portfolio Standard (100% by 2045).  When California inevitably over-generates from its solar photovoltaic installations compared to its customers load during the solar day, it could export the over-production to other states over the network, and then import a previously-contracted “swap” of renewable energy back from other states when the sun sets.

PftP LLC has developed a Concept Development Study (CDS) to test this concept.  Several innovative Upper Midwest electric utilities who can see a potential world beyond their own service territories have subscribed to support it.  The CDS is planned to be completed by mid-2022.

About the authors: Robert H. “Bob” Schulte is principal, Schulte Associates LLC, an executive management consulting firm with office in Raleigh, North Carolina. He has 41 years experience in the electric power industry. A native of South Dakota, he was the Project Manager of the proposed 270 MW Iowa Stored Energy Park compressed air energy storage (CAES) project, and is the primary author with Nick Critelli of “Lessons from Iowa”, the U.S. Department of Energy/Sandia Labs report on lessons-learned there.  “Lessons” is a recognized textbook on how to do a large-scale grid energy storage project in an Independent System Operator (ISO) region.  He also performed the Gregory County (South Dakota) Pumped Hydro Storage study, combining large-scale (1200 MW) pumped hydro storage with renewables to create a 100% renewable, fully dispatchable, baseload generation resource. Schulte is president of Power from the Prairie LLC (www.powerfromtheprairie.com).

Fredric C. “Fred” Fletcher, assistant GM–Power Supply, Burbank Water & Power (retired). Fletcher has led power system planning, engineering, development and operations since the 1970s.  Fred is Chairman of Power from the Prairie LLC. In the 1970s Fred was part of the original staff of the then newly-formed Missouri Basin Power Agency in Sioux Falls (now Missouri River Energy Services), supplier of power to 57 municipal systems in a four-state region.  He not only performed the planning for the agency, but also was responsible for operations.  In the 1980s, he became the Assistant General Manager of Burbank Water and Power, the position from which he retired in July 2016. He has developed a combustion turbine project, Lake, that was power plant of the year for Combustion magazine in 2004, as well as a combined cycle project, Magnolia. He developed smart grid technology that led to a $20 million grant from the DOE and was one of the best smart grid implementations winning numerous national awards.