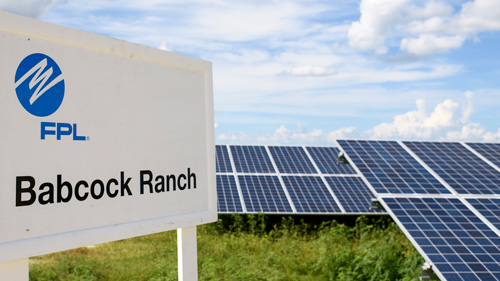 NextEra Energy utilities Florida Power & Light and Gulf Power are taking steps to cut down their carbon emissions dramatically this year through 2030, but they are not forsaking fossil or conventional generation completely.

FPL and Gulf released details of their generation plans for this year through 2030. These investments include what was called the largest energy storage facility later this year, more solar and also a massive 1.1-GW combined cycle gas turbine plant.

By the end of the decade, FPL forecasts that nearly 40% of the company’s power will be generated by zero-emissions energy sources – a more than 65% increase from 2020.

“FPL continues its rapid expansion of bringing clean energy that is also reliable and affordable to the more than 11 million people we serve throughout the state,” said Eric Silagy, FPL President and CEO. “Since we built our first solar energy center in 2009, we have continued to make smart, long-term investments in solar energy centers, battery storage facilities and even a green hydrogen pilot project, which may help us create an emissions-free energy future. These projects continue to deliver for our customers and make Florida a leader in sustainability and resiliency at costs well below the national average.”

Later this year, FPL plans to commission its Dania Beach Clean Energy Center, a CCGT plant which will replace less efficient and now dismantled units at the Fort Lauderdale site.

By the end of 2021, the NextEra utilities will be bringing seven more solar energy centers into commercial operations. FPL already has about 40 solar power sites installed.

The 409-MW/900 MWh Manatee Energy Storage Center will begin operations in late 2021. The FPL facility will be charged by an existing solar power plant in Manatee County.

FPL also plans to keep its carbon-free nuclear generation operating for years into the future. These plants include Turkey Point and St. Lucie.