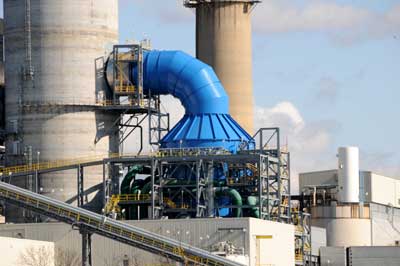 While many coal-fired power plants in the United States have ceased operation in the last decade, a large number remain in operation.  In other parts of the world, coal-fired power continues to represent a major share of electricity production.  Control of sulfur dioxide (SO2) emissions from these plants is essential for protection of air quality.  As such, and particularly for wet-limestone flue gas desulfurization (FGD) systems, it is important environmentally and economically to both optimize SO2 removal and minimize limestone consumption.  Limestone purity and reactivity can vary widely, even within individual limestone formations.  Another major variable is coal sulfur content.  Use of a chemical additive is beneficial to enhance SO2-limestone reactions, however, difficulties have been encountered regarding the efficiency and availability of previous products.  This article outlines the performance and cost improvements of a new compound in a full-scale application on a large coal-fired unit.

A generic flow diagram of a wet-limestone scrubber is illustrated in Figure 1.  The process is a classic example of an aqueous acid-base chemistry reaction applied on a large industrial scale, where alkaline limestone slurry reacts with acidic sulfur dioxide.

Sulfur dioxide is first absorbed into the liquid phase as it contacts the slurry sprays.

Some theoretical chemists argue that true H2SO3 does not exist and that SO2 retains its molecular character and is surrounded by water molecules.  However, when SO2 is added to water the pH drops, which suggests that Equation 1 is correct and that the following dissociation reaction is accurate.

The principal component of limestone is calcium carbonate (CaCO3), which reacts with the aqueous acid as follows.

Combining Equations 1, 2 and 3 illustrates the simplified but fundamental scrubbing process.

In the absence of any other reactants, calcium and sulfite ions will precipitate as a hemihydrate, where water is actually included in the crystal lattice of the scrubber byproduct.

The hemihydrate is a difficult product to handle, and in most scrubbers, air is injected into the scrubber slurry to convert the sulfite to gypsum (CaSO4·2H2O).  Under normal circumstances, gypsum is relatively easy to dewater.  High-purity synthetic gypsum is often sold to wallboard manufacturers at nominal cost, as it saves the plant the environmental issues and expense for landfilling.

While all the reactions shown above are essential for proper scrubbing efficiency, the chemistry outlined in Equations 2 and 3 is extremely critical, especially from a kinetics standpoint.  Even with high-purity limestones (CaCO3 content of 94 percent or greater), the stone still must be finely ground (greater than 90 percent through a 325-mesh screen) to ensure the required reactivity in the scrubbing vessels.  But, many plants do not have access to such high-purity limestones.  The stone may contain a significant concentration of dolomite (MgCO3âˆ™CaCO3) or inert materials that inhibit reactivity.  Thus, supplemental methods are needed to boost the reactions.  A common method that has been used for years is addition of dibasic acid (DBA) to scrubber process streams, but new technology is improving upon this chemistry.  Dibasic acid is a generic name for a blend of relatively short-chain dicarboxylic acids (two COOH functional groups), which add hydrogen ions (H+) to help in the dissociation of limestone (examine again Equation 3), and then circulates through the process to continue assisting with SO2-absorption chemistry.  However, the availability, cost, and even efficiency of DBA have placed limits on the chemical’s effectiveness.  An alternative is available that is much more promising for wet FGD reactivity enhancement.

An Improvement Over DBA

Personnel at the Longview Power Plant in Maidsville, West Virginia had faced constant problems with handling and feeding DBA to the wet-limestone scrubber of their 770 MW supercritical steam generator.  For example, the product must be kept warm to prevent solidification.  Exacerbating the issues were DBA delivery constraints, both from a distance perspective and that the tank volume had to be lowered to less than 10% before introduction of a fresh load.  Combined, these factors affected scrubbing efficiency and SO2 removal, the latter of which is a critical aspect of scrubber operation.  Violation of discharge permits can result in load restrictions or forced shutdowns.

Accordingly, the plant staff began full-scale testing and then subsequent application of an alternative, specially-formulated organic acid blend with the product name of FGD1105 (patent pending).  Almost immediately upon chemical addition, SO2 emissions dropped by approximately 35% to 40%, such that even at full load one of the scrubber’s five recycle pumps could be, and was, removed from service.  Stack SO2 emissions only slightly increased from 120 lb/hr to 200 lb/hr following the pump reduction. This action alone reduced auxiliary power consumption by 3 MW, at a projected annual benefit of approximately $700,000.  As a test, the plant staff removed a second recycle pump from service, and found that SO2 removal was still more efficient than in the period prior to the FGD1105 addition.  According to Chad Hufnagel, Longview’s Plant Manager, the ability to operate with 3 recycle pumps instead of 4 or 5 has provided additionally flexibility for recycle pump maintenance strategy, as well as offering additional net revenue opportunity with improved unit efficiency.

Operating data after introduction of the FGD1105 also showed an initial 3% reduction in limestone usage.  Once the full chemical feed control system is in place, an estimated 6% to 10% limestone reduction is projected.  Not only does this save on direct reagent cost, but reduced limestone consumption lowers maintenance and wear on ball mills and other slurry-generating equipment and piping.

Another indicator of the improved efficiency of the product vs. older technologies is shown in the following graphs.

Figures 2a and 2b.  A comparison of buffering capacities of scrubber enhancement chemicals.  Data provided by ChemTreat.

Another aspect of the new chemical is that it can be fed neat or in diluted form.  The neat product has a freezing point of -11oF, which makes it well suited for winter application in cold climates, as exemplified by this successful use in northern West Virginia.  Either bulk or tote delivery is possible due to the low freezing point.

The staff at Longview Power Plant has calculated that the change to the new buffering product results in a potential benefit of $1.2 million annually due to reductions in parasitic load and limestone usage.  Also beneficial is that the improved scrubbing efficiency allows for additional margin in controlling SO2 emissions.  Furthermore, the enhanced chemistry increases flexibility when scheduling maintenance on certain pieces of equipment, most notably slurry recycle pumps.  For those plants where a higher sulfur, local coal is less expensive than lower sulfur coals from farther away, improved scrubbing efficiency might tip the balance regarding the cheaper fuel.  Also, initial data from several applications suggests that this chemistry may reduce mercury re-emission from WFGD systems.  Per further data analysis, look for additional information in a future Power Engineering article.

(Acknowledgement to Dale Stuart of ChemTreat for his development of this patent pending chemistry.)

About the author: Brad Buecker is Senior Technical Publicist with ChemTreat.  He has 36 years of experience in or affiliated with the power industry, much of it in steam generation chemistry, water treatment, air quality control, and results engineering positions with City Water, Light & Power (Springfield, Illinois) and Kansas City Power & Light Company’s La Cygne, Kansas station.  He also spent two years as acting water/wastewater supervisor at a chemical plant.  Most recently he was a technical specialist with Kiewit Engineering Group Inc.  Buecker has a B.S. in chemistry from Iowa State University with additional course work in fluid mechanics, energy and materials balances, and advanced inorganic chemistry.  He is a member of the ACS, AIChE, AIST, ASME, NACE, the Electric Utility Chemistry Workshop planning committee, and the Power-Gen planning committee.  He may be reached at bradley.buecker@chemtreat.com.

Ron Rosinski is the Environmental Engineer/Chemistry Supervisor at Longview Power.  He has 38 years of experience in the power industry having worked for Florida Power and Light Company as well as in the water treatment industry.  Ron has a B.S in Biology/Chemistry from Eastern Michigan University and a M.S in Environmental Management from University of Maryland.

GE Hitachi & BWXT working together to design, build SMR at...

GE Hitachi & BWXT working together to design, build SMR at...