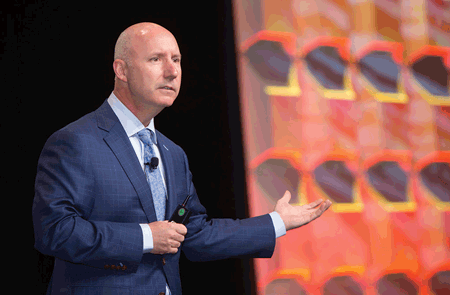 For the energy industry, change isn’t just constant – it’s accelerating. All the speakers at the 2016 POWER-GEN International keynote address, held at the Orange County Convention Center in Orlando, addressed the evolving landscape with the theme The Power to Change.

The morning’s first speaker, Rick Halil, said he’s been in the energy industry for 27 years, but he feels the current environment is experiencing more change than he’s ever seen before. Numerous factors are driving this change, including government policy, an increasing focus on environment, abundant and cheap natural gas, advancing technology, load swings and growing numbers of online devices.

He said the overall power grid needs to be flexible, and that battery storage and simple cycle power stations can help address fluctuation of wind power. However, even older technologies like combined-cycle plans are also becoming more flexible to meet moment-to-moment power generation needs.

Halil said that these changes are also coming to the consumer side of the power grid, as internet-connected lights, HVAC units and other devices have given customers more control than ever over their consumption and management of energy.

Alex Glenn started his talk by saying the last transformational moment in the electrical industry was in the late 19th century, when Thomas Edison and George Westinghouse battled over AC and DC currents. The next biggest change came June 29, 2007, when Apple founder Steve Jobs introduced the iPhone.

The smartphone revolution gave customers more choice, convenience and control than ever before. Combine that with the ability to use their own residential-scale or business-scale power generation devices such as roof solar or power storage, and utilities now have to work harder to build brand loyalty.

Glenn said energy storage will define the investment cycle of power generation companies for the next 20 years, especially as existing peaking technology ages and faces replacement.

Willi Meisener said that, while every region faces change, they often are confronting unique challenges when it comes to meeting demand and incorporating new technology.

For example, developing companies such as India plan to put up 175 GW of renewable energy by 2022 as they strive to bring affordable power to the 40 percent of their populations that don’t have reliable electricity at all.

By contrast, the New Jersey city of New Brunswick installed smart grid technology in order to manage the distribution of energy in a more flexible, intelligent and efficient way.

This first-of-its-kind facility generates electricity by taking lignite and converting it to gas. Kemper County’s process is self-contained from start to finish, with a neighboring lignite mine, two gasifiers and a chemical plant that strips out by-products such as anhydrous ammonia, sulfuric acid and carbon dioxide and packages them in forms that Mississippi Power can sell to other user.

Though Kemper County has faced years of delays, Wilson said that any time you do something new, you’ll face adversity. The gasifiers are producing electricity and the plant is scheduled to be commissioned next month.