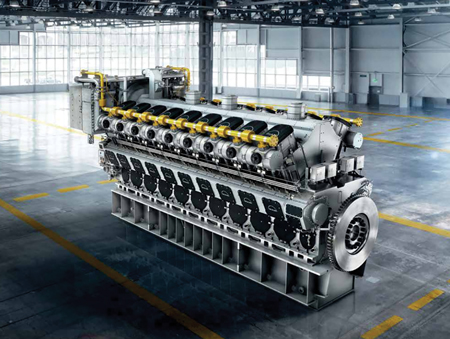 The transforming energy market shifts focus to reducing power plant environmental impacts, where financial and technical benefits improve competitiveness. This leads to an increased share of renewable power generation and also a focus on highly efficient, flexible and cleaner conventional power plants. Consumer perception and recent regulations have led to some coal and oil fired power plants to be shut down, depending on changing weather conditions, are not consistent and require very fast power generation capacity response to ensure a stable grid.

This article presents specific decision criteria that highlight key differences between applications and site performance of both technologies in gas-fired power plants.

Power plant projects below 400MW require modernized decision criteria when it comes to selecting engines and/or turbines. This article offers guidance in a more objective choice between both technologies.

In any power plant technology comparison the list of parameters needing appropriate consideration includes at a minimum:

Most of these parameters impose severe impact when considering technical concepts or commercial feasibility and therefore are discussed in more detail. 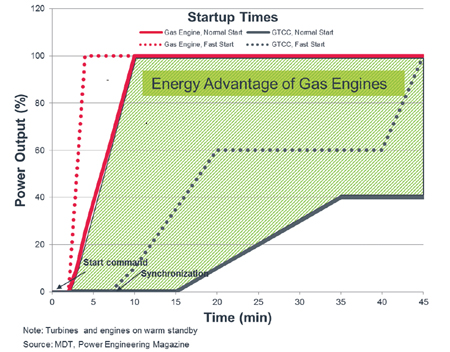 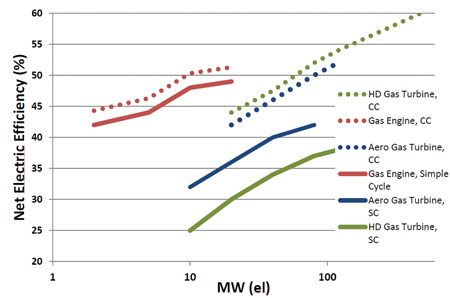 The traditional load scenarios are:

With an increased amount of fluctuating renewable power generation being fed to the grids sometimes during the day the demand may possibly be generated from renewable sources. However, depending on weather conditions on other days or at other times during the day, generation from such sources often remains insufficient. Sub sequentially required back-up, or reserve-means of power generation, therefore are a factual necessity. Many existing thermal plants, however, were designed for more or less continuous high loads. Presuming renewable power generation being prioritized when feeding the grid, the existing thermal plants can no longer do what they were intended to, but have to consider a stand-by position with decreasing annual operating hours at highly fluctuating load requirements. As a consequence, intermediate and peak load scenarios with the need of frequent fast equipment start for limited operating times of few hours only become a common requirement.

Gas engines show advantages in their single cycle efficiency value (figure 2) and a very fast startup performance. Multiple equipment starts per day are possible and reduced load operation at 25 percent or even lower are common features of modern engines. One hundred percent of output can be achieved under five minutes, starting from warm standby condition, compared to 30 minutes for a turbine under the same conditions. Such technological features are tentatively better suited to match the modern industry and energy market demands as described above.

Figure 1 shows a typical comparison of a gas engine plant start-up versus gas turbine combined cycle, both from warm conditions i.e. prior shut down of more than eight hours.

While life cycle costs of any thermal power plant are vastly dependent on fuel cost, appropriate reflection of the expected load profile need to be incorporated into any comparison of various technological concepts. The number of full load hours and especially the increasing amount of part load hours need to be forecasted as precise as possible, however strictly individually. Conversion to full load equivalent hours tentatively includes the risk of ignoring the efficiency losses factually occurring under part load operation. Whenever limited overall operating hours and part load phases or even multiple starts and stops dominate the load profile, a GT and/or combined cycle option may disqualify. Gas engine maintenance costs often turn out to be lower than those for turbines, depending on actual project parameters.

For gas turbines, maximum power is often defined by maximum component temperature in the turbine, permissible forces to the shaft, or the generator frame size. For gas engines, maximum cooling water temperature often is the limiting factor. The gas engine output is hardly affected by increases in ambient air temperature and stays at 100 percent up to around 38OC. When running a gas turbine, however, power output continuously decreases.

Figure 3 compares the plant altitude effects on the performance of gas engines versus gas turbines. Again, the diagram duly takes into account the different “regular” ISO conditions for gas engines as shown in the diagrams legend. The equipment behavior differs dramatically. While engines offer full load output at any altitude up to 1,000 meter above sea level, the industrial gas turbine’s output decreases by 10 percent.

The aging behavior of the different technologies can be seen by examining the “heat rate” evolution as a continuously increasing factor in between maintenance periods as compared in Figure 4. Furthermore, and “peaking” demand vs. a regular baseload operation has additional effects on gas turbines because every gas turbine start accounts for some extra operating hours being added to the counter. Operating hours counting of gas engines is not affected by multiple starts. Subsequently peaking operation with gas turbines will exaggerate gas turbine maintenance costs with overhaul activities appearing earlier.

Comparing both technologies under the same plant load, in single or combined cycle, helps to understand the superior efficiency of the gas engines over operating time.

If we add the particular consideration of part load efficiencies for a single machine, we can clearly see the efficiency difference between the competing technologies where the gas engines are significantly less affected by reduced load demands.

Gas Engines are now available in up to 20.2MWe where a power plant of 100MW requires an area of around 60mx60m. A gas turbine power plant can achieve ~100MW output by installing 2x50MW units, which will install with a more compact foot print at subsequently reduced civil works cost. 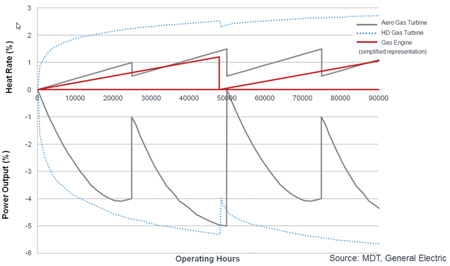 In general, with gas turbines, the total installed masses are smaller. This is an advantage for transportation into remote areas and installation. A gas turbine power plant requires fewer auxiliary systems, as well as no, or fewer, additional exhaust devices. Pure machine weight-related issues should be considered as well where gas turbines benefit from much lower equipment weight than gas engines.

Many technical and commercial parameters need due consideration when selecting the proper gas power plant technology in accordane with the actual project parameters. Such parameters and other required data will be presented and further discussed as part of the convention’s presentation.

Low gas admission pressure requirements for engines (6 bars comparing to around 21 – 40 bar for turbines) reduces infrastructure costs and risks and allows placing of such generators close to the consumers. Therefore engine based power generation also supports the decentralized power generation concepts, as well as reducing CAPEX and OPEX by eliminating the need of fuel gas compression.

In case thermal energy can be utilized, an overall plant efficiency beyond 90% can be achieved.

Finally, gas turbine combined cycle plants may also take advantage from any location being incorporated in industrial areas by selling steam to neighbor industries. However, the same logic applies to a potential gas engine plant in CHP configuration. Thermal energy provision to neighbor industries or any district heating provider with heat being provided by means of hot water efficiently generated from advanced heat recovery systems can create extra profitability.

In the power range up to ~200-300 MW we see an interesting field in which both technologies can be fairly considered.

At the time this article was written, Ralf Grosshauser was the senior vice president of MAN Diesel & Turbo SE. Grosshauser now serves as CEO of Thermamax GmbH…

Decarbonization, Optimizing Plant Performance, the Future of Electricity, the New Energy Mix (CHP, microgrids) and Trends in Conventional Power are all tracks planned for POWERGEN International happening Jan. 26-28 in Dallas. The POWERGEN Call for Speakers is now open and seeking session ideas around projects and case studies.