As gas and steam power generation plants approach the end of their operational life, plant owners face a challenging decision between upgrading or retiring the plant. Retiring a power generation unit can reduce a plant’s reactive power capacity, possibly creating a deficit that directly affects the local system’s reliability. If a unit is retired, the challenge will be to maintain grid voltage at or near the plant interconnection point to ensure grid reliability.

Solutions have involved installing new static volt-amperes reactive (VAR) compensators, shunt capacitor banks and/or synchronous condensers at or near the plant location. However, there potentially is a more economical and effective solution: converting the existing synchronous generator into a synchronous condenser.

There are considerable benefits to making this conversion. Re-using the existing generator, its foundation and building, auxiliary systems and grid connections offers an economical source of reactive power capacity. Typically, about 30 to 35 percent more reactive power can be produced via the conversion because the unit can be overexcited in accordance with its capability curve that would not otherwise occur in power generation mode. Reactive power produced by a synchronous condenser is considered superior to static VAR solutions; the condenser increases reactive power in response to a system voltage drop while also supplying the local system with significant short circuit support.

The conversion requires a system-level approach and custom engineering as conversion involves decoupling the turbine from the generator, installing a starting means for the condenser, designing and installing a new control system and making minor mechanical modifications to the generator. The resulting condenser will operate at nearly zero real power, but can produce or consume reactive power commensurate with the generator’s capability curve.

Reactive power capacity is a critical feature of the electrical infrastructure and research underscores its role in avoiding power outages. The reliability of the system depends not only on the generation and distribution equipment reliability, but also the reactive power capacity, which is required to stabilize local system voltage.

Reactive power has been defined by the U.S. Department of Energy as “the portion of electricity that establishes and sustains the electric and magnetic fields of alternating-current equipment. Reactive power, which must be supplied to most types of magnetic equipment, such as motors and transformers, is provided by generators, synchronous condensers, or electrostatic equipment such as capacitors.” 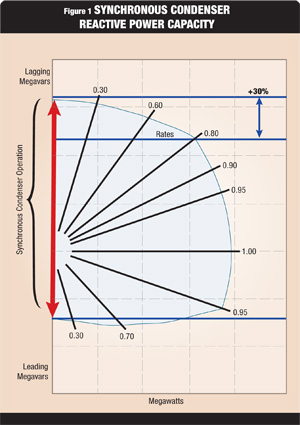 Reactive power also supports the flow of real electrical power throughout the grid. When short-term and long-term changes in grid reactive power capacity are not balanced, the result can lead to system voltage instability, islanding, voltage collapse and, ultimately, system breakdown.

Converting an existing synchronous generator to a synchronous condenser requires a custom-engineered solution because each plant will have a unique design and layout. The generator, electrical, cooling and lubrication systems must be evaluated as a whole. The conversion will require that the turbine be decoupled from the generator.

Starting means: In the conversion process, the first step is selecting the condenser’s starting means. The condenser must be accelerated to a speed to allow synchronization with the grid. Because the turbine is decoupled and cannot accelerate the condenser, synchronous or induction motors have been used for that purpose. Typically, the collector end of the rotor shaft is not designed to withstand the transient torques that a starting motor may impose on the rotor during a fault. Therefore, the motor is typically coupled to the turbine end of the condenser rotor, which requires a new foundation for the drive motor, coupling and clutch.

GE’s gas turbine static-start technology has been adapted for this purpose providing the stand-alone condenser with its own starting means. This static-start approach eliminates the motor’s expense, cycle time and auxiliary equipment. Furthermore, the turbine can be condemned in place, avoiding demolition and environmental expenses. Avoiding a drive motor on the rotor train also simplifies the rotor’s dynamic behavior and its response to incorrect synchronization, possibly eliminating the need for failure contingencies. In addition, the static-start equipment can be equipped to start more than one condenser at the plant.

Prime mover: The next consideration is whether to remove the turbine from its foundation or simply decouple it. GE’s solution is to decouple the turbine but keep it in place. That approach causes minimal disruption in the turbine-generator’s lubrication system. It also allows the condenser to be converted back and forth between generator and condenser modes, if desired. The turbine could be removed without a substantial change to the synchronous condenser conversion. If a starting motor is used, typically it must be installed on the turbine end of the condenser, which requires removing that portion of the turbine. 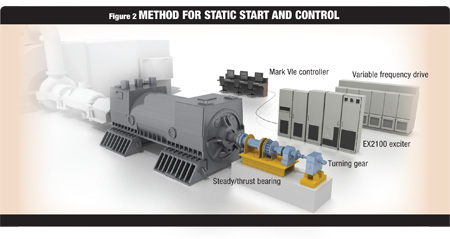 Mechanical: Mechanical components are generally designed and installed to properly support the condenser rotor. Typically, this involves a thrust bearing (the turbine that performed this function is now decoupled) as well as a turning gear. A steady bearing may also be installed, if required based on the rotor dynamics. GE’s solution involves installing a single steady bearing, thrust bearing and turning gear assembly on the collector end of the rotor. In certain instances, it may be helpful to modify the lube oil system to include high-pressure lift oil that reduces the breakaway torque of the rotor at start-up.

Condition of the Existing Generator: The final step involves evaluating the condition of the existing generator and determining its expected lifespan and reliability. If the synchronous condenser will have significant life expectations, it may be worthwhile to consider replacement rotors, field rewinds and stator rewinds. These modifications, along with a properly sized excitation system, can also increase the condenser’s reactive power capacity.

Converting an obsolete synchronous generator to a synchronous condenser is a viable, economical alternative to retiring the unit. As the condenser is a rotating device, it can also provide short circuit support in addition to reactive power capacity. While converting the unit requires a system-level approach and custom engineering, the result can greatly extend the generator’s useful lifespan. For the community, a conversion to a synchronous condenser can provide electrical system voltage support resulting in a stable source of electric power.

COP26: Keeping 1.5C alive with commitment to coal ‘phase down’