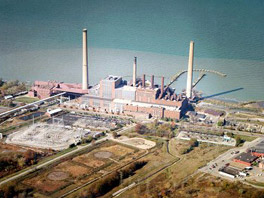 The final operating unit for a nearly 100-year-old Ohio coal-fired plant will shut down in two months and the lakefront facility demolished and later converted to public redevelopment.

The owners of the Avon Lake Generating Station, GenOn Holdings, has sold it and the adjoining property along Lake Erie. The buyer, Charah Solutions Inc., will begin environmental remediation and sustainable redevelopment once taking possession early next year.

The power plant’s only operational unit, the 660-MW Unit 9, is being retired in September.

Avon Lake Generating Station’s first units were built in the 1920s. All but one of the nine units are now inoperable, with the final one only utilized in times of peak demand, according to reports.

“This is the end of an era, and it reflects the changes occurring in our nation and around the world,” city of Avon Lake Mayor Greg Zilka said in a statement. “We’re excited about a once-in-a-lifetime opportunity for a transformational redevelopment for Avon Lake that will open up a 40-acre site on Lake Erie to the public, while we also take a big step forward in cleaning up our environment and improving the quality of life for our community.”

A Charah Solutions subsidiary, Avon Lake Environmental Redevelopment Group, LLC (“ALERG”), will acquire the 40-acre area located on Lake Erie, which consists of multiple parcels of land adjacent to the generating plant, including the generating station, submerged lands lease in Lake Erie, substation/switch gear and transformers, administrative offices and structures, coal rail and storage yard parcels south of Lake Road as well as the interconnection agreement. ALERG will be responsible for the shutdown and decommissioning of the coal power plant and performing all environmental remediation and redevelopment work at the site.

See our full coverage on the Future of Coal-Fired Generation

GenOn has owned and operated the Avon Lake Generating Station for decades . The company was acquired by NRG Energy some years ago but then was spun off in its own entity after GenOn emerged from Chapter 11 bankruptcy, according to reports.