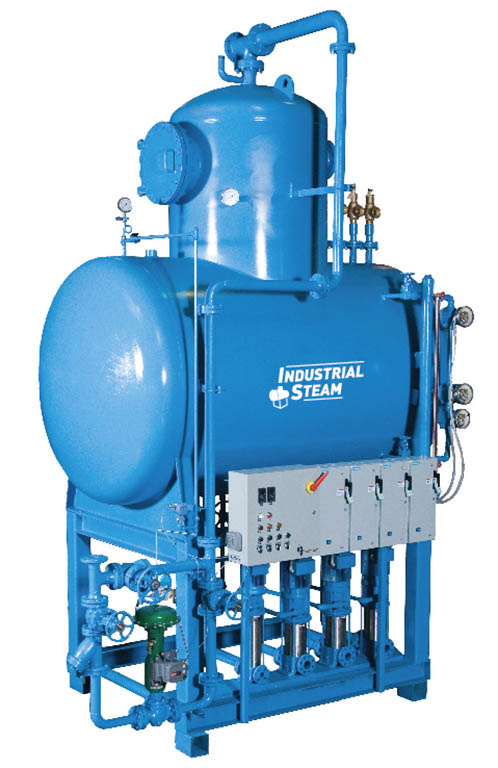 Like many industry leaders, the American Boiler Manufacturer Association (ABMA) has not only embraced the world of social media, but also taken it one step further into the world of podcasting.

“Inside the Boiler Room” is a monthly offering of industry experts and inside-the-machinery examples delivered to thousands of listeners and available on the ABMA website and all major podcast platforms.

On a recent podcast, Jim Kolbus, product manager with Clark-Reliance, discussed the importance of monitoring the water level in the boiler drum.  He noted “by monitoring the drum level on a regular basis you can head off issues before they become major problems”.

Lynch noted that another podcast also focused on water was an episode with Tom Garbarino from BFS Industries and Jeremy Zellmer from Industrial Steam that focused on the impact of deaerators (pictured)— which removes oxygen and gases from the feed water–in the boiler system.

“The topic of maintenance came up and one story shared them opening up the deaerator that was having performance issues and it looked like a cave, with stalagmites and stalagmites… significant build up…nobody had checked it out in years,” ABMA President CEO Scott Lynch told Power Engineering. “Obviously, the routine maintenance schedule recommended by the manufacturer was not being followed.”

It is these and many other insights on boiler room installation, operation and maintenance that are addressed in their podcast series.

But you don’t have to wait for the next ABMA podcast to hear from the boiler industry. It’s those kinds of things and much more that power plant professionals and boiler end users can talk about with the boiler industry experts at POWERGEN International happening next week in New Orleans.

About 30 ABMA member companies are exhibiting at POWERGEN, including ABMA which will have its own space in Booth 4344. Anyone who visits the booth can receive a copy of “Passport to the Boiler Industry,” a booklet which helps potential customers navigate the various facets of the industry, including those represented at POWERGEN.

So clearly POWERGEN will have boiler experts aplenty. But the ABMA roster also includes companies which manufacture fans, burners, the aforementioned deaerators, controls and more.

Power Generators may think primarily in terms of the turbine and generators, but the modern plant entails components and challenges way beyond those parts. The ABMA and its member offer educational opportunities in helping end users understand how to get more out of their plant.

“People can come to ABMA and our member booths and have discussions,” Lynch pointed out. “It not only helps the end user understand our products, but also on the flipside helps our members understand what’s going on in the field.”

The ABMA members will have product specialists at their booth. “If they come over with a question, our members will direct them to the right people,” Lynch added.

Clark-Reliance also is sponsoring a “Boilers and Beignets” event 10:30 a.m. Wednesday, November 20 at POWERGEN. Those attending can network, eat New Orleans’ famous pastries and get an update on new boiler codes. Experts from Cleaver-Brooks and John Zink Hamworthy will be speaking in the Future of Conventional Power Knowledge Hub.

POWERGEN International is offering more than 90 content sessions during its November 19-21 run at the Ernest N. Morial Convention Center. Close to half of those sessions will be focused on such topics as Optimizing Plant Performance, the Future of Coal-Fired Generation, Gas-fired Plants and Smart Power Plants.